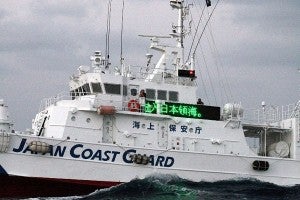 This image received from Taiwan’s CNA and taken on September 25, 2012 shows a Japan Coast Guard patrol boat with a (neon) sign reading “Japanese territorial waters” as they monitor a flotilla of Taiwanese fishing boats which are headed to the Diaoyu / Senkaku islands disputed in the East China Sea, in territorial waters. AFP PHOTO/CNA

MANILA, Philippines—The Philippine Coast Guard expects to wrap up talks with the Japan International Cooperation Agency within the next few months for the acquisition of 10 brand-new patrol boats from Japan in late 2014 or early 2015.

This was disclosed to the Inquirer on Thursday by Cmdr. Armand Balilo, PCG spokesperson, who said “the talks are ongoing.”

Quoting Rear Adm. Rodolfo Isorena, the Coast Guard commandant, Balilo said, “Hopefully, the talks will be completed by the last quarter of the year so that actual construction of the vessels could be started.”

“The two sides have agreed that all 10 patrol boats will be 40 meters (131 feet) long. But they are still talking about other specifications,” added  Balilo, chief of the Coast Guard’s public affairs office.

The JICA, he said,  proposed that five of the vessels be built in the Philippines and the five others in Japan, but the Coast Guard “prefers that all 10 patrol boats be built in Japan.”

Established in 1974, the JICA is the primary Japanese government agency engaged in technical cooperation and other forms of aid promoting socio-economic development in developing countries.

Shinsuke Shimizu, head of the Japanese Embassy’s chancery, said in an earlier interview that unlike the decades-old, stripped-down ships the Philippines has been getting from the United States, the patrol boats the PCG will get from Japan will be brand new.

He said Japan would continue to help the PCG deal with the country’s maritime safety and law enforcement problems.

Shimizu pointed out that since 1990, the Japanese government has been assisting the Coast Guard in its capacity-building program.

In the late 1990s, Japan gave the PCG a search-and-rescue vessel that the agency named BRP Corregidor. The ship was one of two Philippine vessels that faced off with Chinese ships at Panatag Shoal (Scarborough Shoal) in the West Philippine Sea (South China Sea) between April and June last year.

In February, the Nikkei Shimbun, a Japanese business daily, reported the patrol boats that Japan plans to donate to the Philippines cost $11 million (about P473 million) each. The move, the paper said, was linked to regional efforts to monitor China’s maritime activities.

Japan and the Philippines are embroiled in separate territorial disputes with Beijing, whose dispute with Manila involves overlapping claims to parts of the West Philippine Sea (South China Sea), which is believed to be sitting on huge amounts of oil and natural gas.

Beijing claims almost all of the West Philippine Sea, including part of what the Philippines claims is within its exclusive economic zone.

Like the Department of Foreign Affairs, the PCG maintains that the government’s acquisition of more patrol boats from Japan was not directed against any particular country.

The move is simply aimed at upgrading the Coast Guard’s equipment so it can effectively carry out its mandate of monitoring the country’s territorial waters and preventing intrusions, according to Balilo.