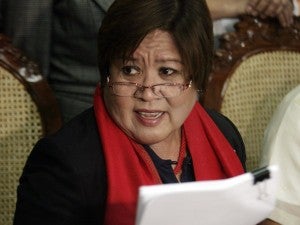 MANILA, Philippines—Justice Secretary Leila de Lima on Tuesday said the National Bureau of Investigation (NBI) was conducting its own probe into the alleged sexual exploitation of Filipino women in the Middle East by Philippine officials, including one reportedly involving a Filipino woman who committed suicide.

De Lima said she met with Akbayan party-list Rep. Walden Bello on Monday on the Department of Justice’s role in the investigation of the “sex-for-flight” cases.

She said that following the investigations by the Department of Foreign Affairs and Department of Labor and Employment, the DOJ could come in if it is determined that criminal charges are warranted against certain Filipino overseas officials.

She said the Inter-Agency Council against Trafficking (Iacat) could also come in to help in the investigation since the cases “had elements of human trafficking.”

De Lima said the NBI was conducting a similar trafficking investigation and some agents had gone abroad to investigate another case, this one involving a Filipino woman who was allegedly raped by “an official involved from an embassy.”

The NBI was also set to investigate the case of another Filipino woman who allegedly committed suicide in a Philippine halfway center, she said.

“It’s supposed to be an incident of reported suicide but there are indications that this may not be the case,” said De Lima, declining to give details or the identities of the people involved.

As the government cast a wider net in its investigation of the sexual exploitation of female migrant workers, President Aquino on Tuesday warned erring public officials of dire consequences if they are found guilty.

The President said his standard order to ambassadors abroad was to prioritize the welfare of the 10 million overseas Filipino workers.

“I always remind them: We have something like 10 million Filipinos outside of the country. The first function of our personnel outside the country is to ensure the well-being and safety of our countrymen,” Aquino told reporters at Camp Crame where he graced the distribution of new guns to policemen.

The President said that in fairness to the officials, many showed efficiency in keeping Filipinos out of harm’s way during the Arab Spring, the wave of uprisings that swept the Arab world beginning in 2011.

“But if there are lawbreakers—the watchmen turned intruders—they should be prepared [to face the consequences] because they did the opposite of what we instructed them to do,” he said.—With a report from TJ Burgonio