Nov. 3 is new deadline for illegals in Saudi 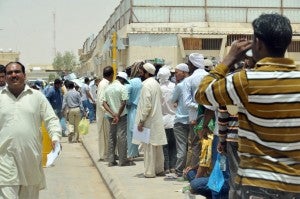 Foreign illegal laborers wait in a queue at the Saudi immigration offices at al-Isha quarter in al-Khazan district west of Riyadh, on June 30, 2013. Some 1.5 million illegal foreign workers in Saudi Arabia were in a race against time to take advantage of an amnesty ending July 3—but which was extended to Nov. 3—that would allow them to stay or return home without prosecution. AFP PHOTO/FAYEZ NURELDINE

That was how ordinary Filipinos as well as officials from the Department of Foreign Affairs (DFA) and the Department of Labor and Employment (DOLE) described the announcement in Riyadh that Saudi Arabia had given foreign workers four months to obtain a legal status in that country.

Illegal foreign workers will now have until the end of the Islamic year on Nov. 3 to regularize their status or return home without prosecution, the interior ministry said in a statement carried by the official SPA news agency.

According to the Saudi labor ministry, more than 1.5 million illegal foreign workers have come forward so far. Of these, some 180,000 have left the kingdom in addition to more than 200,000 unregistered workers expelled at the start of the year under new regulations to stamp out illegal immigration.

The Saudi announcement provides relief for thousands of undocumented Filipinos cramming to fix their travel documents, or are seeking repatriation to the Philippines.

Philippine Ambassador to Saudi Arabia Ezzedin Tago relayed to the DFA the decision of Saudi King Abdullah bin Abdul Aziz to extend the deadline to November, heeding appeals from foreign governments seeking a longer grace period for their citizens.

The DFA spokesman, Assistant Secretary Raul Hernandez, said Filipinos had been seeking an extension so that OFWs facing possible expulsion could be repatriated to the Philippines “or their papers are regularized and they are allowed to stay there legally.”

In April, the Saudi government initiated a crackdown on foreign nationals illegally staying in the kingdom. The king had originally given those who lack proper papers until Tuesday to correct their status.

The Saudi king, however, decided to extend the deadline, noting “the large number of those who are seeking a correction of their status who need more time, and in order to make it easier on citizens and residents who have taken the correction period seriously,” the Saudi Ministry of Interior said.

“This humanitarian gesture has brought relief to our overseas Filipino workers who would like to go home or legalize their stay in the kingdom,” the DFA said in a statement.

Vice President Jejomar Binay, the presidential adviser on OFW Concerns, thanked the Saudi king for his “kindness and compassion.”

“The extension definitely eases the anxieties of thousands of kababayan (our countrymen) and their families,” Binay said.

“The extension will allow us more time to process the documents to legalize the stay of our OFWs or process the repatriation of those who wish to come home,” Binay added.

Hernandez said there were 10,000 Filipino illegals in Saudi Arabia who had expressed their intent to return home, while some of them opted to stay.

The DFA has so far repatriated 815 Filipinos from the kingdom, Hernandez said.

Labor Secretary Rosalinda Baldoz urged the undocumented Filipinos to grab the new chance given them by the Saudi government.

Baldoz said she had instructed labor attaches in Saudi Arabia to assist Filipinos in getting the workers’ employment documents that would lead to the legalization of their stay.

“I have also directed them to take advantage of the coming Ramadan break to meet with our workers in the Filipino community and inform them, particularly the illegal workers, of the steps they need to take to legalize their stay by availing of the extension,” Baldoz said in a statement.

Even with the extension, some families continued to appeal to the Philippine government to expedite the workers’ repatriation.

“Please don’t wait until the deadline before doing something,” said Melanie Reyes, a resident of General Trias, Cavite, whose husband Cris along with 18 other Filipino workers of a subcontracting company were awaiting repatriation.

However, the news of the extension came as a relief for Reyes and other anxious families.—With reports from Niña Calleja and AFP