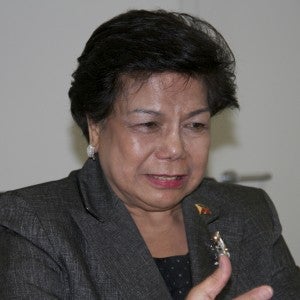 SAN FRANCISCO—To doubting Thomases out there—the news is true. Numbers do not lie. The Philippines IS Asia’s rising tiger. A number of global credit rating agencies have upgraded the Philippine’s rank to BBB- (Investment Grade). The New York Times calls the Philippines the “Newest Bright Spot in Asia.”

Lilia B. de Lima said as much to a group of businessmen and community leaders at a breakfast briefing held at Dentons Law Offices on Market Street. The director general of the Philippine Economic Zone Authority (PEZA) and undersecretary of Trade and Industry led the briefing, themed “Business and Investment Opportunities in Philippine Economic Zones as gateways to the 600 Million Strong South East Asian Market” hosted by CalAsia.

Joining her was Arlen Chou, president and COO of Rucker & Kolls Inc., an American firm that has been running a full operation in one of the PEZA facilities the past six years. Chou confirmed that his business is thriving inside PEZA. Rucker & Kolls is the original patent holder of the probe card and a leader in providing reliable testing of complicated testing requirements.

Leaving no doubt among the attendees that PEZA is indeed the “gateway to the Asean market in a leading global emerging economy,” Dr. de Lima said that of the 86 percent total commodity and service exports from the Philippines, 76 percent comes from inside PEZA.

The World Bank’s Foreign Investment Advisory Services of the International Finance Corporation recently cited the Philippines for having the best practices among economic zones worldwide.

PEZA is the first and only government agency today that is rated ISO 9001:2008 Quality Management Systems (QMS). It is one of the most widely sought-after certifications, being the global standard seal of good housekeeping. De Lima intends to get an ISO certification for being green soon.

While her term is coterminous with the president, De Lima has been PEZA’s director general since its inception 18 years ago when she was appointed by then President Fidel Ramos. She has served under every succeeding administration from Joseph Estrada and Gloria Macapagal-Arroyo to Simeon Benigno (Noynoy) Aquino.

They have each put a large chunk of trust in her hands. Had she tendered her resignation at the end of every administration? “I don’t wait. At the end of every presidential term, I pack up my things; but I get a call from the new president asking me to stay.”

The start of her term in 1995 “wasn’t easy.” She inherited what was then called the Export Processing Zone Authority (EPZA), an agency with 1,000 employees, which she had to trim down to less than half. Political patrons went after her and threw everything at her including threats of bodily harm, she said.

But the feisty lawyer and former Constitutional Convention delegate (1971-72) knew every rule in the book and vanquished the bloated “organized bureaucracy.”

From 16 economic zones with under 420 companies, De Lima has grown PEZA to 286 economic zones and counting, from Luzon to Mindanao with 3,000 companies thriving inside, of over 800,000 employees. Roughly 500 highly dedicated and trained staff members run PEZA.

De Lima enumerated why PEZA, a government agency, has evolved into an efficient machine. “Absolute honesty and integrity is expected from all employees,” she emphatically states.

“Investors will not invest where there is corruption. There is no corruption in PEZA. We immediately fire corrupt employees…. after due process, of course,” she says with an impish smile, in deference to the fact that her niece, Leila De Lima, is the current secretary of Justice and would “expect nothing less.”

But the lady has no qualms about firing dishonest employees and promises to continue firing people for corruption. Investors must be assured, she said, that there are no “unexpected costs” in doing business.

“I give no second chance to corrupt people. Because corruption is planned,” she says. “It is not a mistake or a stupid action. Everyone makes honest mistakes but corruption? That is planned.”

Even at the height of global financial crisis, companies were expanding and investing in the zones, confident there was no corruption, she said proudly. “And they get the same brand of service in all 286 zones.”

Management “Man” of the Year

In 2011 the Management Association of the Philippines (MAP) awarded De Lima a rare honor, conferring on her the 2010 Management Man of the Year Award. She was the first woman awarded this honor in MAP’s 64-year history, and it is seldom awarded to a government official. The MAP theme that year was, appropriately, “MAPing the Culture of Integrity.”

“It was totally out of the blue. I did not expect it—over tycoons and billionaires? I did not realize the awesomeness of the award until later,” she said. Did she prefer to be called “Woman of the Year”? She said it did not matter. (By the way, at PEZA, women workers are holding their own, even besting men. Women have even become champion welders, some of them winning all top honors in a welding competition. One of these welders has even climbed up the ladder and become a manager. De Lima believes education has a lot to do with the upward mobility of women in the Philippines.)

Her leadership in PEZA has attracted hundreds of investors both local and foreign—P1.7 trillion in investments, $391 billion in exports, and over 723,000 jobs generated.

Since then, acknowledgement of her work in promoting the Philippines has been coming in from the most prestigious institutions and from other countries. Recently, the government of Japan awarded her the highest honor given to a non-head of state, the Order of the Rising Sun Golden Silver Star. It was first given to US astronauts.

In May this year, on the 50th Annual Academy of American and International Law, presented by The Southwestern Legal Foundation in Dallas, Texas, De Lima received yet another first for women, the Robert G. Storey International Award for Leadership. The award is presented semi-annually to a past participant of the Academy who has demonstrated the qualities of leadership and integrity embodied in Robert G. Storey, Executive Trial Counsel for the United States at the Nuremberg Trial of major Axis War Criminals, and founder of the Southwestern Legal Foundation. It recognizes Dean Storey’s dedication to peace, justice, and the rule of law in the international community.

The most challenging part of her job thus far has been “cleaning up the bureaucracy,” her “most bruising” experience. “But if the righteous will cower before the rogues, the world is not fit to live in–now the rogues are gone,” she said.

Still, she has to constantly remind local governments to leave the PEZA companies alone and not embroil them in local politics or bury them in bureaucratic paper work. De Lima repeatedly tells them that the companies always have the option to locate their business in other countries.

PEZA attracts investors with business-friendly policies. A foreign company is allowed 100 percent ownership except basic utilities and sectors that impact national security. The basic rights of investors are respected. Repatriation of invested monies is easy and so is remittance of profits although, according to her, investors would rather reinvest and expand projects in the Philippines.

The Philippines has a strategic location, jutting out to the Pacific Ocean, making it easily accessible to shipping, and is central to all the Asean countries and their thriving economies and growing populations. Although investors cannot own buildings, they can lease the land for 50 years plus another 25 years. Besides, PEZA offers comparative First World amenities in housing, sports and entertainment.

The companies within PEZA are engaged in a wide range of businesses—electronics and semiconductors, metal and byproducts, information and technology services, transportation, car parts, shipbuilding, electrical machinery and apparatuses, agro-industry and, lately, recreational and medical tourism. It might surprise many that the Philippines is now the world’s No. 4 shipbuilding country after Korea, Japan and China.

De Lima has made PEZA a one-stop-shop operation for investors. Every government authority needed by an investor has an office within the PEZA compound. De Lima proudly announced that PEZA has upgraded its service to a “non-stop shop,” operating 24/7 year round, including the director general herself.

What legacy would she like to leave behind? “That I made a difference,” she answered. “Anywhere I go and whatever I do, I’d like to make a difference.”

Their only holiday is Good Friday. From business application, to visa requirements, export and import permits, everything is automated and can be done online. Delivery processes are expedited in and outside the zones in cooperation with different government agencies.

She extolled the exceptionally hardworking, world-class Filipino workforce. They are educated, articulate with high work ethics and very friendly. In the IT service sector, Filipino workers are considered the new breed of world-class service professionals.

“They are called global knowledge workers and can compete with the best in the world,” she stated. “It takes only eight weeks to train Filipinos compared to 16-24 weeks with foreign counterparts. They are the least problematic work force among comparative Asean countries. In the past eight years, there have only been two strikes from 3,000 companies inside PEZA. In PEZA there is no red tape; only red carpet treatment for all investors or partners.”

According to Philippine Trade and Industry reports, every year a million Filipinos enter the work force, with close to half a million being college graduates. De Lima said that when companies inside PEZA look for new hires, they only have to post the announcement at their gate or office and the next day, hundreds line up to apply. They don’t need to advertise in the papers.

Last but not least, De Lima adds that it helps to have “a reformist government in President Aquino. “His Daang Matuwid (straight path) mantra of transparency, level playing field, good governance and philosophy of no corruption are good for investors and the country at large.

With all the awards De Lima is reaping, there is no doubt the lady has made a difference in her country and in the lives of many.

For more information on PEZA, go to www.peza.gov/ph. Board of Trade and Industry at