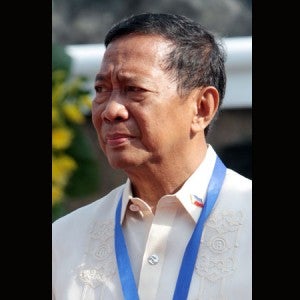 MANILA, Philippines – Philippine Vice President Jejomar Binay called off a proposed visit to China Sunday to save a Filipina from being executed there for drug trafficking, saying Beijing had declined to receive him.

Binay said he was to have left during the day, carrying a letter from President Benigno Aquino III to Chinese President Xi Jinping asking him to spare the woman.

“This Saturday, I was informed that the Ministry of Foreign Affairs of China has sent word that now would not be a convenient time for me to visit China,” Binay said in a statement.

“I wanted to go to China to personally appeal for compassion. I am sad however that China has chosen to take this position regarding my visit,” he added.

“Given this development, I am left with no option but to cancel my trip to China. I ask for prayers for our compatriot and her family.”

The woman was one of two Filipinos arrested for smuggling more than 12 kilograms (26 pounds) of high-grade heroin into China in 2011.

The execution is due to take place Tuesday, Binay’s office has said, while the man had his execution set back by two years.

Chinese embassy spokesmen in Manila could not be reached for comment Sunday.

Aquino had previously sent Binay to China in February 2011 to seek a reprieve for three Filipinos also convicted of drug trafficking, but the three were executed the following month.

The executions triggered widespread condemnation in the Philippines, which abolished the death penalty in 2006.

The latest case comes amid already rocky bilateral relations between the two countries soured by overlapping territorial claims in the South China Sea.

About a tenth of the Philippines’ 100 million population work abroad, many of them under harsh conditions where drug traffickers sometimes exploit them into becoming drug mules.

The Philippine foreign department says 213 Filipinos have been jailed in drug-related cases in China.