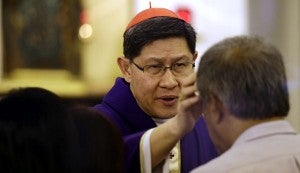 Luis Antonio Cardinal Tagle, the Archbishop of Manila, makes a sign of the cross on the foreheads of devotees during a mass in observance of Ash Wednesday which ushers the 45-day Lenten Season Wednesday February 13, 2013 in Manila. AP FILE PHOTO

Tagle, one of the youngest cardinals of the Roman Catholic Church, said the Holy Father teased him, saying that he thought the 56-year-old de facto primate of the Church in the Philippines had just come from kindergarten, apparently referring to his youthful, boyish looks.

The cardinal also quoted Francis as saying that despite the “magnitude of responsibility” he felt for the worldwide church of 1.1 billion souls, he is consoled by an inner “peace that does not come from me.”

“As I said, I was in Rome around two weeks ago for a meeting and after the meeting, we had an audience with the Holy Father,” Tagle said in his homily during an early evening Mass at the San Agustin Church in Intramuros, Manila, on Friday.

“When he approached me, I said, ‘Your Holiness, I’m from Manila. I want to remind you I’m from the Philippines.’ He said, ‘Oh really, I thought you are from a kindergarten school … scuola materna,” he added.

Scoula materna is Italian for nursery school. Scuola dell’infanzia is the Italian equivalent of kindergarten.

He might have been referring to the joke Cardinal Joseph Ratzinger reportedly made when he introduced Tagle to the late Pope John Paul II after Tagle joined the Vatican’s International Theological Commission in the mid-1990s.

“The following day, I had a personal audience with (Pope Francis) and I returned the joke. I told him, ‘Look, a few months ago, you were Cardinal Bergoglio. Now, look at you… Imagine, I have to call you Pope Francesco,” Tagle said.

Tagle said he then asked Francis, the first non-European to head the Church in nearly 1,300 years, how he was doing.

The Holy Father was said to have replied: “This is something that I cannot explain. I look at the magnitude of the responsibility and I see it every day but what I marvel at is that, in my heart, there is peace … peace that does not come from me.”

“I should be rattled by now. I should be spending the nights sleepless but there is peace,” Tagle quoted the Pope as saying.

Tagle and 11 other archbishops and bishops—including Catholic Bishops Conference of the Philippines president and Cebu Archbishop Jose Palma—concelebrated the Friday evening Mass to commemorate the Pope’s Day.

Tagle, who was made a cardinal in November 2012, is apparently still adjusting to his role as a prince of the Church.

“Leaving the hall where we had the meeting, one of the Swiss Guards noticed me and called ‘Eminenza! Eminenza! (Eminence! Eminence!)’ I kept on walking and he ran after me and said ‘Hey, Eminenza’ and I just realized that, yes I am eminenza and it shocked me again,” Tagle said.

It turned out that the Swiss Guard was the one who had escorted Tagle’s parents, brother and other relatives during the consistory when he was made a cardinal.

“In fact, one of your cousins still sends me text messages,” the Swiss Guard told the cardinal.

“I did not even bother asking him who among the cousins,” Tagle said in jest.

Your subscription could not be saved. Please try again.
Your subscription has been successful.
Read Next
Are Filipinos united against China’s invasion of Ayungin?
EDITORS' PICK
CBCP releases litany of thanks for better health
US gets access to more PH bases
12-year data track poor training of PH teachers
Smart launches first joint Telco TVC for Donbelle
Omega Speedmaster super racing: Tiny device massive change
House energy committee chair Arroyo bats for cheap electricity
MOST READ
Pentagon tracking Chinese spy balloon over US
NorthPort, Bolick reach temporary solution to impasse
US gets access to more PH bases
Sandara Park ‘got in trouble’ for not pressing elevator button for a company head
Don't miss out on the latest news and information.