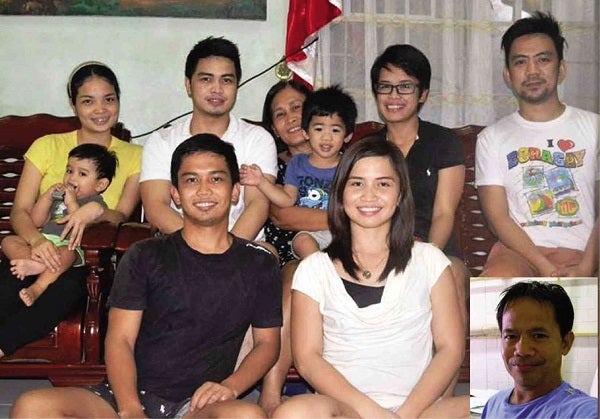 ABRAHAM Tejada (inset) and his family

Abraham Tejada was a graphic artist at Solar Films when he decided to leave the country to work in Saudi Arabia in 1994.

“With the money I was earning, I realized I could never send my four children to college,” he recalls. At that time, his eldest child, Jennifer was 11 and the youngest, Aveejay, was 2.

After 20 years working as a graphic designer in Saudi Arabia, Abraham, now 60, looks forward to coming home for good next year.

He will come home to a home built by his years of overseas work. Yet, his best accomplishment, he says, is the success of his children—Jennifer, 29, a nurse in Singapore and already married; Abraham Jr., 27, an Information Technology graduate; Kristine, 24, is already in her 4th year Medicine proper while Aveejay, 21, will finish a course in Dentistry next year.

“I’ve been celebrating Father’s Day and other special days away from home for 19 years and 9 months,” says Abraham.

Like millions of other oversease Filipino worker-fathers, Abraham has braved homesickness and other emotional difficulties in strange and distant lands to secure a better future for his family. Fathers are expected to do this. But they also bear their own emotional difficulties, loneliness and fears.

“Explaining the situation to kids can be tough, but they have to understand the necessity of my leaving home to secure their future,” Tejada adds.

The first few months were very difficult, he says. After a year or two, he managed to fight off loneliness by keeping busy. Meeting fellow Filipinos can also be helpful to ease homesickness.

“I was very lonely during my first three months, he says, adding that it took about three years to actually shake off the  pangs of homesickness. He pursued painting on the side and got involved in sports, too.

He says he still feels the homesick aches, usually for a week after he returns from his annual vacations. 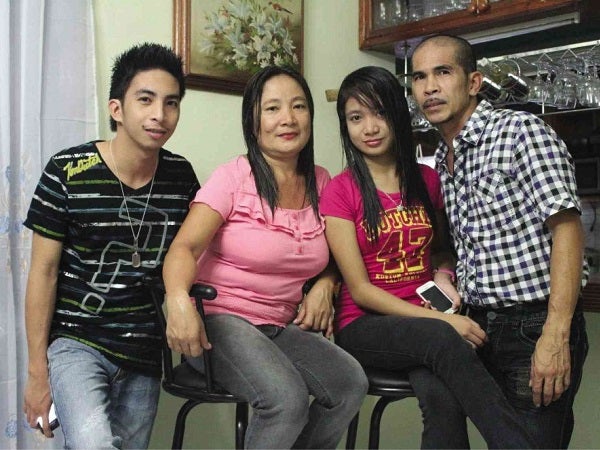 ARIEL Alacaba and his family

But the most painful experience of being away that still brings  tears to his eyes was when his second son, Abraham Jr., wrote him about how his brother, Aveejay, only 2 years old then, had sat under the sampaloc tree, crying and waiting for him to come home.

“That letter tore my heart. The message was embedded in my mind and left an indelible scar that up to this day, I feel tears welling in my eyes whenever it comes to my mind.”

Thanks to Skype and FB

Up to the late ’90s, communication was still difficult. Sending and answering letters could take a month.

Eventually, he was able to bring Aveejay and some of the other children along with his wife to Saudi Arabia to spend summer vacations. But he knows that these and his own annual homecomings could not really compensate for time lost while the children were growing up.

Facebook, eChat and Skype videocalls did allow him to monitor his children’s activities while they were growing up.

Yet, he also knows that he owes much to his wife, Ma. Salome, for the acceptance and understanding he has gotten from his children.

“I always tell the kids to be honest with me. But most of the time, they tell their problems to their mom,” he says.

It was knowing that his wife was home taking care of the kids that gave Abraham the emotional security to go on.

Another overseas dad is Ariel Alacaba, a Math teacher in Nassau, Bahamas.  He left the Philippines 10 years ago when his kids were very young—Bryle Jem was 12 years old and Pzyra was 5.

“Working away from home “could give them a quality life they would never experience if I stayed,” he explains.

Ariel fought off homesickness, too. “My principle was: Homesickness should not be my cup of tea or else I am not working away from home. It’s hard to work abroad. There are times, when I am sick but I still need to get up, go to work, do all the house chores, find a part-time job to earn extra money for the family…

“Just focus on the future of your children, always inspire yourself with whatever you have, whatever dreams for your family back home. Trust God that everything will be alright with His blessings and guidance,” Ariel says.

Trust God, and your wife

“I have to endure eight more years. “By that time, with the grace of God,” adds Ariel, “my daughter would have already graduated from college.”

Asked if he hoped to bring his kids to the Bahamas, he says he does not consider it because it would be more expensive, and he still plans to retire in the Philippines.

“We see to it that we communicate through new technologies every day especially my daughter, she is so sweet and caring,” Ariel says.

Like Abraham, he admits constant communication is not enough to keep up with the kids. It comes from “trusting God and my wife, Marissa,” who he believes is doing a great job raising their two teenage kids.

His fervent hope is that his relationship with them does not change because of the distance.