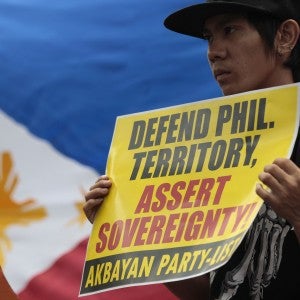 A Fililipino protester holds a slogan beside a Philippine flag during a rally outside the Chinese Consulate in suburban Makati, south of Manila, Philippines. FILE PHOTO

MANILA, Philippines—The Philippines scored China’s “provocative” threat of retaliation in the West Philippine Sea (South China Sea) on Saturday, urging Beijing to defer instead to peaceful means of resolving maritime disputes under the United Nations Convention on the Law of the Sea.

In a statement, the Department of Foreign Affairs reminded China of its obligation under international law to settle disputes without the use of threat or force.

“China has an obligation under international law, especially the UN Charter, to pursue a peaceful resolution of disputes, meaning without the use of force, the threat to use force such as this recent provocative statement of a counterstrike,” said DFA spokesperson Raul Hernandez.

“There is no place in the relations of civilized nations to use such provocative language,” he added.

Hernandez made the statement in response to the Chinese People’s Daily’s scathing commentary on the Philippines on Saturday, which warned of a “counterstrike” as it accused Manila of “seven sins” in the disputed West Philippine Sea, which is how the Philippine government calls part of the South China Sea that is within in exclusive economic zone.

Among other things, the paper, a mouthpiece of the Chinese Communist Party, accused the Philippines of “illegal occupation” of the Spratly Islands, part of which Manila contends to be within its exclusive economic zone.

The commentary also blasted the Philippines for advocating the “internationalization” of the waters, a critical international sea lane that has been under the close watch of Philippine allies, the United States in particular.

China issued its criticism amid war games between the Philippines and the US Navy off the Panatag (Scarborough) Shoal, a territory in the West Philippine Sea that saw a tense standoff between Philippine and Chinese ships last year. At least three Chinese patrol vessels are known to still be in the area.

The commentary also came out as leaders of the Association of Southeast Asian Nations met in Brunei in hopes of drafting a legally binding Code of Conduct that is aimed at ensuring peace in the disputed waters.

Despite Beijing’s sharp statements, the DFA called for sobriety and invoked peace in hopes of averting further escalation of tensions.

“We call on China to be a responsible member in the community of nations. The way towards a peaceful resolution of disputes is through the dispute resolution mechanism under the UN Charter, which is rules-based, transparent, binding and non-provocative,” said Hernandez.

“A peaceful and rules-based resolution to the disputes in the West Philippine Sea is durable and beneficial to all and will ensure peace and stability in the region,” he added.

The Philippines haled China to arbitral proceedings in the United Nations in January in a bid to peacefully settle the maritime dispute. The move has gained the support of the United States, the European Parliament and Japan, which also has a dispute  with China in the East China Sea.

China has rejected the proceedings, asserting “indisputable sovereignty” over the West Philippine Sea. It has been calling for a bilateral solution to its territorial disputes with the Philippines, Vietnam, Brunei, Malaysia, and Taiwan. The Philippines has meanwhile been pushing for a multilateral approach.

Read Next
No complaints of sexual exploitation found in other PH missions
EDITORS' PICK
House energy committee chair Arroyo bats for cheap electricity
Lawmakers eyeing more changes in Maharlika plan
Hidilyn Diaz wins only gold missing from her collection
Shop smarter with vivo’s big 12.12 holiday deals
How not to retire as an ex-president
The vivo Y02 is now available in the Philippines for only PHP 5,299
MOST READ
Jovit Baldivino, ‘Pilipinas Got Talent’ winner, dies at 29
LPA enters PAR, to likely strengthen into tropical depression in coming days – Pagasa
Andi Eigenmann, family in Manila for a quick visit; Ellie dines with grandma Jaclyn Jose
Lawmakers eyeing more changes in Maharlika plan
Don't miss out on the latest news and information.