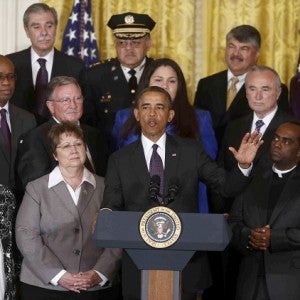 President Barack Obama speaks about immigration reform, Tuesday, June 11, 2013, in the East Room of the White House in Washington. The Senate is preparing to cast the first votes on a landmark bill that offers the best chance in decades to remake the nation’s immigration system and offer eventual citizenship to millions. AP/Charles Dharapak

WASHINGTON, DC—Filipino-American leaders lauded the Senate passage of a historic immigration bill that offers a path to citizenship to most of the estimated 11 million undocumented immigrants in the United States—one million of whom are Filipinos.

“It’s time to celebrate and prepare for the next hurdle,” said Gregory Cendana, executive director of the Asian Pacific American Labor Alliance, whose representatives cheered from the public viewing gallery as the Senate voted 68-32 to pass the bill yesterday (Friday in Manila).

As the bill moves to the House, Cendana and other immigration reform advocates have started to prepare for what they expect to be an uphill battle in the House of Representatives.

US President Barack Obama, in a statement, warned that “now is the time when opponents will try their hardest to pull this bipartisan effort apart so they can stop commonsense reform from becoming a reality.”

“It’s going to be a long and hard fight,” said Bing Branigin, spokesperson for the National Federation of Filipino-American Associations, one of the Fil-Am leaders who witnessed the historic vote in the Senate.

Branigin said they will continue to form alliances with other groups advocating laws that will treat immigrants with dignity and help reunite families separated by a broken immigration system.

“This bill is not perfect,” said lawyer Arnedo Valera, executive director of the Migrant Heritage Commission (MHC). “But it’s a giant step in the right direction. It will provide opportunities for the one million undocumented Filipinos to come out of the shadows and chart better lives for themselves and their families.”

MHC members and supporters made numerous phone calls and sent hundreds of e-mails to senators to lobby for the passage of the bill, Valera said. “We will now reach out to the members of Congress and ask them to do the right thing,” he added.

“A tough but necessary debate awaits us in the House,” said Pulitzer Prize-winning Fil-Am journalist Jose Antonio Vargas, in a Facebook post. Vargas has been in the forefront of the national campaign for immigration reform since he disclosed his undocumented status in 2011.

“The core of the debate will rest on citizenship—more specifically, do we want 2nd-class citizenship in 21st-century America?” he said.

As the Senate prepared to vote on the bill, many immigrant rights groups, including the Los Angeles-based Filipino Migrant Center (FMC), held vigils and rallies, hoping for good news for illegal immigrants who have been waiting, in some cases for many years, for legal status.

“We will continue to push for genuine, humane reform with a focus on protecting families,” said Alex Montances, FMC campaign coordinator. “We are ready to face anti-immigrant forces in the House (of Representatives) who may attempt to pass harsh measures.”

FMC and other groups uniting under the Asian Americans Advancing Justice—a broad coalition of immigrant rights, labor and faith-based groups—held a 24-hour vigil in front of the federal building in downtown Los Angeles starting on Wednesday (Thursday in Manila).

They called for an end to unjust detentions and deportations, the “strengthening of family unity as a cornerstone of our immigration system” and a “direct, affordable, and inclusive path to citizenship.”