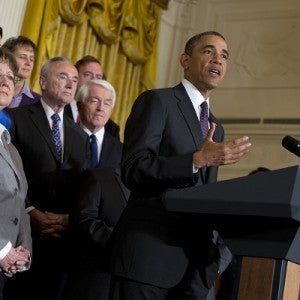 President Barack Obama gestures while speaking about immigration reform, Tuesday, June 11, 2013, in the East Room of the White House. Bolstered by support from Obama, a landmark immigration bill passed a pair of crucial test votes Tuesday in the US Senate, kicking off weeks of debate on the comprehensive reform. AP/EVAN VUCCI

LOS ANGELES–As immigrant rights supporters kept an overnight vigil in front of the Federal Building downtown to “send a strong message” to the Capitol, the U.S. Senate on June 27 passed the Immigration Reform Bill in a 68-32 vote.

The bill now moves to the House of Representatives where its fate is uncertain because many conservatives oppose it.

Fourteen Republican senators joined a united Democratic caucus in supporting the bill, which is backed by the White House, while some 30 organizations throughout the county held vigils, calling “fair and humane immigration reform and end to deportations, clearing of decades-long family visa backlogs, inclusion of LGBTQ families, and a stop to workplace raids and abuses.”

President Barack Obama said, as the bill moves to the House, “The bipartisan bill that passed today was a compromise.  By definition, nobody got everything they wanted.  Not Democrats.  Not Republicans.  Not me. Today, the Senate did its job. It’s now up to the House to do the same.”

Obama explained that the pathway includes passing a background check, learning English, paying taxes and a penalty, and then going to the back of the line “behind everyone who’s playing by the rules and trying to come here legally.”

“We are here given the historic Senate vote today,” stated Betty Hung, policy director of Asian Americans Advancing Justice-LA. “While we hail it as a legislative step forward, we also know that it contains several flaws that concern us, such as, the path to citizenship. The pathway to citizenship should be more inclusive.”

“Immigration reform doesn’t end after this bill,” says LA resident Diane Valencia. “There is a lot more work to be done to fight for fair, just and humane workers rights and also, to reunite families.”

Objecting to the bill, Sen. Jeff Sessions (R-Ala) charged that it “gives no interior protection with stricter border control and security where no people are living.”

But immigrant rights advocates like Hung also criticized “the $46 billion allocated to the militarization of the border instead of spending more on education and healthcare. We call on the House to pass a bill, but a bill that is fair, just and humane.”

According to the most recent statistics of the Center of Immigration Studies, a total of 40 million immigrants make up the U.S. population in which a little over 10 million reside in the state of California alone.