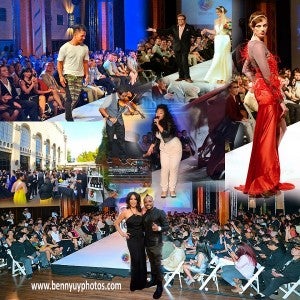 A panoramic scan of the courtyard and red carpet showed many familiar faces among the 500 invited guests. Social media were inundated with real time image uploads of on-goings and lots of kudos.

Providing stellar entertainment on the runway were Cheesa of The Voice Season 2 and YouTube violinist sensation CryWolffs!  Directing the show was ABS-CBN North America’s Head of Production & Global Head of Theatricals John-D Lazatin.

With the unprecedented success of its flagship product, The Filipino Channel (TFC) and Filipino on Demand, its video on demand service on cable, ABS-CBN International expanded its content coverage to Filipinos in the US by offering Lifestyle Network back in April.

In an onsite interview with TFC’s “Balitang Showbiz” host Yong Chavez, ABS-CBN North America Managing Director & Global Content Head Olivia de Jesus said, “The programs that you will find in Lifestyle Network are very much aligned to the passions of Filipinos living in America. We’re out to fulfill your passions and make you realize your dreams. This is a major milestone in our 20 years of service to the Filipinos here in the US.”

“We are very pleased to have Time Warner Cable as our partner in bringing Lifestyle Network to the Filipino community in Southern California and Hawaii,” said ABS-CBN North America Regional Marketing Head & Senior Director Jun Del Rosario. “We hope to see Lifestyle Network as a true destination channel to as many viewers as possible who are interested in its four pillars of Self, Food, Home and Travel.”