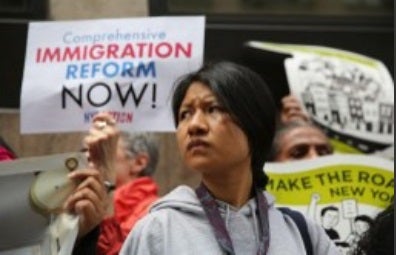 UNITED STATES, New York : NEW YORK, NY – JUNE 14: Immigration reform advocates stage a demonstration, organized by the New York Immigration Coalition, outside a detention facility run by Immigration and Customs Enforcement (ICE) on June 14, 2013 in New York City. Demonstrators staged the event ahead of Fathers’ Day to draw attention to the thousands of undocumented immigrant fathers deported by ICE and separated from their families in the United States. John Moore/Getty Images/AFP

A study by the non-partisan Congressional Budget Office (CBO) projects that the passage of the bill would reduce the US deficit by an estimated $200 billion in the first 10 years and another $700 billion in the second decade.

The CBO study indicates that with 11 million new taxpayers, the United States could substantially reduce its budget deficit in the next 20 years after the law is implemented.

An expected stipulation in the immigration reform bill is the requirement for immigrants to pay back taxes before being allowed to acquire permanent legal status.

Therefore, it would be wise for affected immigrants to start filing returns and paying the corresponding taxes, for past years and in tax years to come. You do not want to be caught in a situation where your tax liability reaches an insurmountable amount that is too high to pay because of added interests and penalties (as high as 25 percent) to the principal tax.

If you are an immigrant without legal status and you had taxable income for past years but did not file tax returns, you should not worry about coming out in the open and correcting the situation.  It is not too late to do so.

I have had clients who did not file their returns for five to six years, and we put them in compliance without a problem.  There is no reason to be afraid—all financial and tax information provided to the IRS are in general are not shared with other governmental agencies like the Department of Homeland Security or any law enforcement agency.  The majority of hardworking and law-abiding immigrants have no cause for concern.

Be ahead of the game.  Before you know it, the new immigration law is before us. The worst situation you may find yourself in is when you are not ready to proceed.

Edgardo M. Lopez, is an Attorney at Law and founder of Tax Release Inc., a tax resolution company. He is admitted to the State Bar of California, the United States Tax Court and a member of the American Society of Tax Problem Solvers. Facebook.com/TheTaxAttorney or email:  [email protected]. Toll free (855) 829 4771. Rated A+ by the Better Business Bureau.