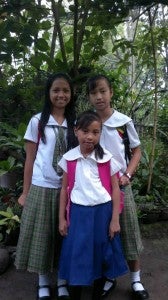 Maria Alexandra Nichole, Ruschiel Faye Marie and Xhandi Glaze are the daughters of Rosell Morales, a staff member of the News Focus, who was among the 32 journalists killed in the Ampatuan Massacre. NUJP PHOTO

SAN FRANCISCO — I remember looking forward to two events in 1999: the birth of my first child and meeting one of Southeast Asia’s greatest writers.

The first happened. The second, unfortunately, did not. (More on that later.)

My son’s birth marked a subtle shift in the way I viewed my career. I went into journalism because I loved writing and because it’s exciting work.

In fact, just a few weeks before my son’s birth, I was in Mindanao in what was technically a war zone.

I was on assignment for the San Francisco Chronicle roaming the guerrilla base of the Moro Islamic Liberation Front, a year before it was overrun by the Philippine military.

I was not in any immediate danger during my visit. But it was that year when I became a parent that my fascination with the dangerous side of journalism began to fade.

That fascination pretty much evaporated after Sept. 11. The terrorist attacks sparked intense US media interest in the Middle East and Central Asia. Like other media organizations, my newspaper sent a number of journalists to those regions, and I could have lobbied to join the contingent of correspondents.

But I chose not to.

The brutal murder of Wall Street Journal reporter Daniel Pearl by extremists underscored the dangers journalists faced during that time. (His son was born about three months after his death.) A newspaper colleague told me he was offered a chance to cover Iraq after the US invasion. He flatly refused. His reason was similar to mine. Like me, he had just become a dad.

I was lucky. I was easily able to shift to business reporting. Other journalists in other countries don’t always have options.

In fact, risk-taking has long been part of journalism in the Philippines. That’s why I’ve always had enormous respect for colleagues in the Philippines, many of whom are exposed to incredibly dangerous situations as they chase big and even not-so-big stories.

Sometimes, they pay a stiff price.

That’s what happened on Nov. 23, 2009 in a small village called Ampatuan. Fifty eight people, including 32 journalists, brutally murdered in broad daylight, in a brazen act of political arrogance. I still remember feeling stunned and angry.

The scars of Ampatuan are still with us.

On Sunday, the National Union of Journalists and other organizations marked the 43rd month since the massacre, amid growing frustration over the prosecution of the cases.

Some witnesses have been killed. Many of the accused remain at large. Three weeks ago, the International Federation of Journalists, the world’s largest organization of journalists, called on the Aquino administration to protect witnesses and the victims’ families.

And last month, the child of one victim felt the need to speak out.

When 78 suspects pleaded not guilty to the charges against them, Reynafe Momay-Castillo, daughter of photojournalist Reynaldo Momay, said in a statement, “I wish I was there to look 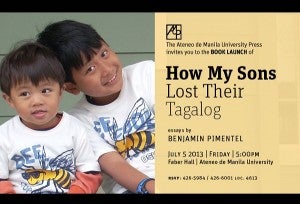 Proceeds from “How My Sons Lost Their Tagalog” will go to the NUJP education fund for children of slain Filipino journalists. ATENEO PRESS PHOTO

at their faces and eyes as they filed their plea.”

“We always say that justice delayed is justice denied,” she also said. “Despite the years of waiting, I remain hopeful and pray that justice will soon be served for the 58 lives lost in the massacre and their families, including more than a hundred of children and orphans who were traumatized and haunted by the killing.”

Fortunately, many Filipino journalists are working to ease some of that trauma.

Even before the Ampatuan massacre, the National Union of Journalists already had set up a program, called the Children’s Fund Project, to help pay for the education of children of slain Filipino journalists.

The program has helped more than 100 children, 26 of whom have graduated from college. Last school year, the program helped 81 children. Thirty of them were children of those murdered in Ampatuan.

Among them were Maria Alexandra Nichole Morales, who is 13, Ruschiel Faye Marie Morales, 12, and Xhandi Glaze Morales, 9. Their father Rosell Morales was on the staff of News Focus, a community newspaper in General Santos City.

It’s in the spirit of the NUJP’s work that proceeds from my book, “How My Sons Lost Their Tagalog,” a collection of essays, most of them my columns for INQUIRER.net, published by Ateneo Press will go to the education fund for children of the Ampatuan victims.

I invite everyone to the launch on July 5 at 5 p.m. at Faber Hall on the Ateneo Campus on Loyola Heights.

One thing I regret as I return home for the book launch at the Ateneo is that I’ll be too late to catch Ateneo Entablado’s re-staging of “Buwan at Baril.”

The play was written in the 1980s by Chris Millado, now vice president and creative director of the Cultural Center of the Philippines. I was part of the UP production of the play nearly three decades ago.

“Buwan at Baril” features the experiences of eight characters in the final years of the Marcos dictatorship: a socialite, a widow of a guerrilla, a worker and a farmer who are brothers; a priest and a woman from Cordilleras; a student activist and a policeman who was once also an activist.

I played the student activist, while film director Joel Lamangan played the cop. Nanding Josef, now head of the CCP’s Tanghalang Pilipino and a popular teleserye actor, played the priest.

Nanding and I later acted together in a TV spin-off of Chris’s play in which he reprised his role as the priest and I played a journalist investigating the military abuses in a Cordillera town. My character dies in the TV drama.

And so did my short-lived acting career.

But I’ve always been drawn to theater which is, like journalism, another creative and incredibly effective form of telling stories. And it’s a thrill to become part of Philippine theater once again, even for just a week.

My first play, “Pramoedya” is among the plays to be featured in this year’s Virgin Labfest at the CCP, directed by Chris with Nanding in the title role.

“Pramoedya” is about the late Indonesian novelist who was once considered a leading contender for the Nobel Prize in Literature.

I first heard of him at UP Diliman in the late 1980s around the time Nanding, Chris and I were together for the “Buwan at Baril” production. Curious about this Indonesian novelist my friends were talking about, I began reading Pramoedya’s novels, “This Earth of Mankind” and “A Child of All Nations.”

I was mesmerized by their power.

The novels tell the story of a 19th century Indonesian journalist and patriot who draws inspiration in his struggle against Dutch colonial rule from the 1896 Philippine revolution.

My fascination with Pramoedya grew even stronger when I learned about the way he wrote his novels. He was arrested and imprisoned after the 1965 coup that gave rise to the Suharto dictatorship.

It was a long and brutal imprisonment. A prison officer told him, “The only right you have is to breathe!” 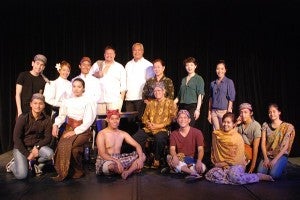 Pramoedya was also barred from writing and reading by the regime.

But that didn’t stop him. He could not be silenced.

To compose his stories, he secretly narrated the novels to his fellow prisoners. His fellow detainees became his pen and paper.

It’s an incredible story of a writer’s insurmountable courage and passion for writing and telling stories.

In 1995, when I was already working as a reporter for the San Francisco Chronicle, I began re-imagining his story as a play. It took nearly 20 years for me to have any confidence that it was ready. It was a pleasant surprise when it was chosen to be part of this year’s Virgin Labfest.

I had a chance to meet Pramoedya when he was finally allowed to travel following the fall of Suharto in 1998. But his visit to San Francisco during his US book tour for his memoir, “The Mute’s Soliloquy” coincided with my reporting trip to Manila and Mindanao.

I missed my chance to meet one of the greatest writers of Southeast Asia. But a friend did get me a copy of his memoir with Pramoedya’s autograph.

“The Mute’s Soliloquy” recalls his incredible ordeal as a political prisoner when he sometimes simply felt like giving up.

“The incentive for life is not so easily dimmed,” he writes. “A voice rebels inside me: Just look at you! Not only have you not finished your work, what you have done is shoddy and poor. You lack imagination. You must stay alive! You need another thirty years at the very least. So put up with it and be its witness.”

He was in his fifties when he wrote that. Imprisonment never did break him as he continued writing and telling stories.