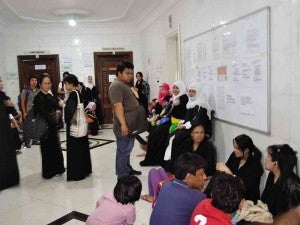 DAILY STRESS Diplomatic staff are straining to meet the avalanche of requests for travel documents. PHOTO BY C. MAYOR

JEDDAH—About 200 Filipinos are crammed on the rooftop of the Philippine consulate here, while hundreds more have pitched makeshift tents in a vacant lot beside the diplomatic office. Everyday, many more line up on the sidewalk even as temperatures in this desert kingdom rise to 49 degrees Celsius (120.2 degrees Fahrenheit).

They are among at least 26,000 undocumented overseas Filipino workers (OFWs) who are seeking travel papers, repatriation assistance or replacements of lost passports—all in an attempt to beat the July 3 amnesty deadline set by Saudi Arabia for either leaving the kingdom or legalizing their stay.

“Para kang nag-aantay sa katapusan ng mundo (It’s like waiting for the world to end),” quipped one worker inside what is referred to as the “tent city.” Some workers stem this sense of  uncertainty and anxiety by playing cards.

“Tiis lang kami sa init at lamok sa gabi (We have to bear the heat and the mosquitoes at night),” said a young mother who introduced herself as Susan, her two-year-old daughter sitting beside her, in an interview at the tent camp. Susan, who did not want to give her family name, said her husband was repatriated two weeks earlier, and she hoped her own repatriation and that of her daughter would come very soon. 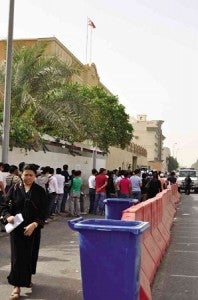 LONG LINESFilipino workers line up outside the Philippine consulate in Jeddah to seek documentation that could help them take advantage of an amnesty for illegal migrants in Saudi Arabia. PHOTO BY C. MAYOR

“Ginagawa naman daw nila ang paraan para makauwi kami (They said they are doing everything  possible to send us home),” said Susan, referring to the officials at the Philippine Consulate General whose three-story building hovers over the tent city. Susan used to work as a maid in Riyadh but  moved to Jeddah where she met her would-be husband after she ran away from her employer in 2010. Her common-law husband was himself a run-away construction worker.

Many runaways like Susan anxiously wait for the release of their travel papers. Others want new passports so they can transfer their sponsorship—a requirement for a Saudi working visa—to the companies where they are currently working.

There is actually no official number on how many undocumented  Filipino workers are in Saudi Arabia. But at least 16,000 have sought assistance at the consulate in Jeddah and about 10,000 in the embassy in Riyadh.

There are, by various estimates, between 670,000 to over a million Filipinos working in Saudi Arabia.  A congressional committee led by Rep. Walden Bello in 2011 reported that about 30 percent of about 1.1 million OFWs were said to be “illegals.”

There are three categories of illegal workers here: those who ran away from their employers, those working for companies that did not initially sponsor their entry to the kingdom, and those who are working for their sponsors but whose work does not match the job description in their residence permit or “iqama.” 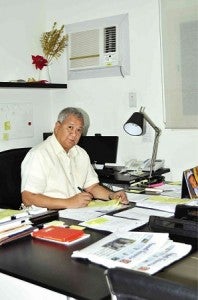 Tent cities in both Jeddah and Riyadh sprang up after Saudi Arabia’s King Abdullah issued an order on April 6 granting a 90-day grace period for illegally-staying workers to either go home or make their stay legal. There were massive crackdowns and job site raids in March. The crackdown aims to accelerate the government’s Nitaqat program which hopes to see more Saudis take over jobs currently held by expatriate workers.

There were reports of guards and campers almost coming to blows at the premises of the diplomatic missions in Riyadh and in Jeddah. But tensions have eased. Also, the Saudi police have come to man the gates and oversee the sidewalk crowds, directing their entry into the consulate in batches.

After the illegal workers get their travel documents or passports they have to proceed to the Saudi General Directorate for Passports to get an exit visa or to the Ministry of Labor to correct their employment status.

Saudi authorities have opened several offices or centers to accommodate about a million expatriates from many countries seeking repatriation or legalization of  stay.

As the July 3 deadline looms, the Philippine diplomatic missions in Riyadh and Jeddah are rushing to process whatever documents Filipinos in Saudi need. 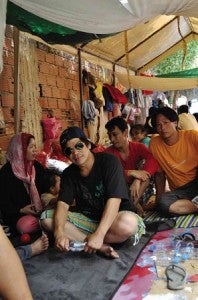 TENT CITY Undocumented workers wait in tents outside the consulate building for their turn at repatriation. PHOTO BY C. MAYOR

Consul General Uriel Norman Garibay said the Philippine consulate in Jeddah is confident that it can process before the July 3 deadline the travel documents for the 3,000  to 4,000 runaways and other illegally staying workers who have sought its assistance, and the passports of about 12,000 more who want to transfer their sponsorship.

“But matters like processing and issuance of exit visas are beyond our control,” said Garibay in an interview early June. The consulate can only assist in providing basic identity documents and in monitoring the processing of papers at the General Directorate for Passports (Jawazat) and the Saudi labor ministry.

Garibay said the consulate, which covers Filipinos working in Saudi Arabia’s Western Province, has already sent home more than 200 workers who sought repatriation and has been processing an average of 500 passports a day for those who want to transfer their sponsorship.

At the main Philippine embassy in Riyadh, which oversees Filipino workers in the Central and Eastern regions, about 10,000 undocumented OFWs have sought its assistance for repatriation and transfer of sponsorship.

“In the areas under its jurisdiction, the embassy has so far assisted (as of June 10) 5,249 OFWs for travel documents, 4,012 for lost passports and 1,688 for renewal or extension of passports. We have also repatriated on government tickets 149 OFWs. Another 421 OFWs have requested assistance for plane tickets,” Ambassador Ezzedin Tago said in an e-mail response to our queries.

The embassy, he said, has speeded up the processing of documents after it obtained approval from Saudi authorities “to weave several basic requirements for [issuing] travel documents and lost passports.”

“We have waived for this corrective period the police report or Jawazat printout.  We have also found ways to speed up the turnaround time for passports from 40 days to 20 days,” he said.

Tago said the embassy has assigned staff from the Philippine Overseas Labor and Office at the Jawazat offices in Riyadh and the Eastern Province to help guide OFWs seeking documentation. The same has been done in Jeddah.

The strains on the country’s diplomatic offices, however, are apparent and their services have been lambasted by some migrant advocacy groups and OFW social networking sites. Some have even called for Tago’s recall.

Similar lines and bedlam are reported in the embassies of Indonesia, Sri Lanka, Pakistan, India and other dominant labor-sending countries.

The Saudi Gazette newspaper reported on June 11 that a labor ministry committee was expected to ask the king to extend the July 3 grace period for three more months. The committee noted the “procedures of status correction were slow and the expatriates overcrowded the offices of the Jawazat and the labor ministry, queuing for long hours under the scorching sun.”

At the OFW tent city, meanwhile, 35-year-old Joel Dinghayan waits anxiously for the release of his travel papers so he can finally go home to his family whom he has not seen for five years. His story is not unique among OFWs: A welder, Joel said he arrived in Saudi to find that the company he was to work for  would not honor the contract he signed in Manila. His contract provided for a monthly paycheck of 1,700 Saudi riyals (SR), with free food and accommodation. His employer, SGS Establishment,  gave him only SR1,000 basic pay and SR250 allowance. So he left the company  three months after his arrival.

He was able to find another job with a food company which paid him SR3,700 monthly, but his problem was he could not remit money directly because he no longer had a valid residence permit or iqama. He managed to send money to his family with the help of friends. His biggest problem was he missed his wife and children but he could not leave the country without fear of imprisonment and fines. He felt trapped in Saudi Arabia.

For the likes of Joel, the amnesty is a way out of such a trap. The King’s amnesty waives the fines and punishments for illegally-staying migrants who opt to leave but threatens to impose even higher penalties after the deadline.

Still, there are probably others who will opt to stay on as undocumented migrants. They are like other kababayans who chose to risk their lives in Syria or other war-torn countries rather than return to the Philippines.