Gov’t urged to improve conditions at shelters for OFW 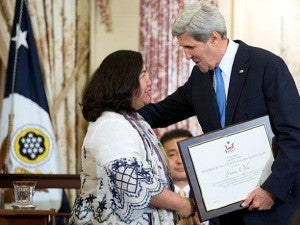 Susan Ople, president of the Pasay City-based Blas F. Ople Policy Center, said the team should “look into safeguards” within the shelters run by Philippine embassies abroad to make sure the OFWs are not subjected to further abuse.

“We need a parallel effort to review and improve the conditions of welfare centers for OFWs in various countries. These shelters and every inch of our foreign posts must be safe havens for distressed women workers overseas,” Ople, a former labor undersecretary, said in a statement.

She made the statement as the Department of Foreign Affairs and the Department of Labor and Employment began their investigation into the alleged “sex-for-fly” racket allegedly perpetrated by Philippine diplomatic and labor officials on distressed OFWs, many of whom are runaways or undocumented workers.

Ople was in Washington DC last week where she and several others received awards from the United States Department of State for her efforts to combat human trafficking the Philippines. The award coincided with the release of the State Department’s annual Trafficking in Persons Report.

Ople cited a provision in the report which stated that the Philippine government “identified and provided protections to trafficking victims but did not make significant efforts to increase the availability of specialized services.”

She said the government’s Inter-Agency Council Against Trafficking can come up with such specialized services, including the professional management of the different shelters overseas catering to distressed OFWs.

“The best defense against this and other allegations is for the Overseas Workers Welfare Administration to train and professionalize the staff that runs these shelters and maintain strict and unified standards on how embassy personnel can have access to the wards staying at these shelters,” she said.

“I am glad that the DFA and DOLE are swiftly reacting to these allegations, and that an impartial investigation shall soon take place. However, based on our experience at the Ople Center, such probes require the full cooperation of the aggrieved parties,” she added.

One of the cases handled by the Ople Center was the sexual harassment complaint filed by a domestic against ambassador to Kuwait Shulan Primavera.

Ople recalled that the complainant’s testimony, which was corroborated by other witnesses, revealed the practice by embassy personnel in Kuwait of getting household helpers from among the wards staying at the welfare center.

“Had it not been for her testimony, we would have been completely unaware of this practice which places the distressed OFWs in an awkward situation of having to serve in the households of the very persons tasked to ensure their immediate repatriation,” Ople explained.

She also underscored the importance of aftercare and onsite services for distressed OFWs, particularly the trafficked victims.

“Even here in the United States, there is now greater emphasis on aftercare programs and measures to protect the rights of trafficked survivors. I know that our workers overseas and all embassy personnel can benefit from a more consistent, professional and developmental approach in running these shelters, aligned with international best practices,” she said.