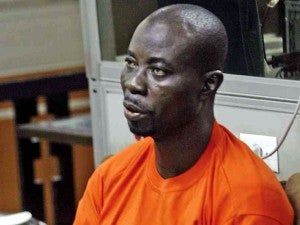 MANILA, Philippines—The Benin national arrested by the National Bureau of Invetigation after ingesting and then expelling dozens of capsules containing shabu has been charged with possession and transportation of illegal drugs in the Manila Regional Trial Court.

Akilou Alido Bassi, 30, from Republic of Benin in Africa, admitted ingesting a total of 60 capsules in an attempt to bring in illegal drugs in exchange for a $4,000 payment, police said.

Jonathan Galicia, head of the NBI Reaction, Arrest and Interdiction Division, earlier said that Bassi, an alleged member of the West African drug syndicate, swallowed 40 of the capsules while 20 were inserted into his anus.

The NBI conducted monitoring and networking activities for intelligence gathering after receiving information that a drug mule would try to bring in illegal drugs over the first weekend of June.

Bassi was intercepted by immigration officers on June 7 and turned over to the NBI for investigation.

On the way to the NBI headquarters, Bassi appeared sick and uneasy while constantly holding his stomach. He was brought to the hospital for examination and an X-ray revealed the presence of a number of capsules in his stomach.

Bassi defecated an initial 34 capsules in the presence of NBI agents and the NBI Forensic Chemistry Division confirmed the substance to be methampethamine hydrochloride.

On June 11, Bassi expelled 23 more capsules, for a total of 751 grams of shabu with an estimated value of P1.5 million to P2 million. He was inquested for transportation and possession of illegal drugs on June 9 and the case was filed in the Manila RTC on June 17.