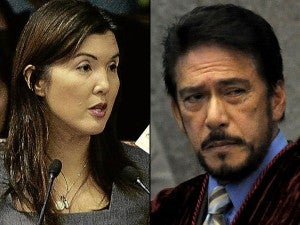 MANILA, Philippines—Outraged senators are calling for an inquiry into reports of the sexual exploitation of distressed Filipino migrant workers by Philippine Embassy officials in the Middle East.

“If in fact the allegation of ‘sex for repatriation’ is true, then this is one of the worst cases of exploitation that have befallen [female overseas Filipino workers],” Sen. Pia Cayetano, chair of the Senate youth, women and family relations committee, said in a statement e-mailed to the Inquirer.

The Senate foreign relations committee chair, Loren Legarda, described as “unforgivable” allegations that Philippine Embassy officials tasked to facilitate the return of distressed migrant workers are the ones exploiting them.

“This is not only embarrassing but also demeaning to the country,” Sotto said, referring to the reports about the sexual exploitation of distressed Filipino women in the Middle East by labor officials assigned to Philippine embassies there.

Sen. Gregorio Honasan said criminal charges must be filed once an investigation showed that embassy officials were indeed involved in the forced prostitution of female Filipino migrant workers.

Senator-elect Cynthia Villar said the implicated officials should be temporarily suspended and called home for an investigation.

“They should not be allowed to go scot-free,” Villar said, adding that the recall should be a warning to other Filipino officials abroad that “nobody is above the law and those who transgress the law [will] be punished accordingly.”

The Catholic Bishops’ Conference of the Philippines (CBCP) supported the call for an investigation.

“If there are real victims seeking justice, the concerned government agencies should really investigate and the culprits should face the consequences of their [actions],” said Fr. Edwin Corros, executive secretary of the CBCP Episcopal Commission on Migrants and Itinerant People.

On Tuesday, Akbayan Rep. Walden Bello, chair of the House committee on overseas workers’ affairs, disclosed that a Philippine Embassy official in Amman, Jordan, and another in Kuwait were running prostitution rings using distressed Filipino women seeking shelter in the embassies in the two countries.

Cayetano asked the government to investigate and called on the concerned agencies to hold the officials accountable.

She called the officials “predators” who should be “charged, jailed and banned from holding public office.”

The Department of Foreign Affairs and the Department of Labor and Employment must take “immediate and decisive action while observing due process of law,” the senator said.

She said the two departments should disclose the identities of the officials and their accomplices.

“They should also urge all victims to come forward and provide them assistance so that they would be able to file charges in court.”

Cayetano said the government must also find ways to hasten the repatriation of migrants staying in government shelters abroad to put an end to their exploitation.  With a report from Jocelyn R. Uy