From desert kitchen to call center 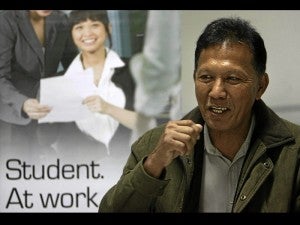 Chef Edgardo Fabella remembers holding on to dear life on the back of a pick-up truck with seven other Filipinos as it drove across the Libyan desert to flee from armed men who had looted their camp.

But after escaping the civil war in the North African country, the 55-year-old former overseas Filipino worker now faces a new challenge—mastering the nuances of English grammar and pronunciation—as he plans to become a call center agent.

Fabella has just taken a free course on information technology (IT) With the help of Bantay OCW Foundation, Informatics, and the Overseas Workers Welfare Administration (OWWA).

Recalling his escape from Libya in an interview at the Bantay OCW Foundation center in Mandaluyong, he said: “It was really frightening… the Libyans were hostile. They were saying, ‘You go.’”

Fabella said he would like to stay put and take his chances here.

“This (course) is a great help because I’ve decided to change careers. My work in the kitchen has become tedious,” Fabella said.

“I’ve been working in restaurants since I was 19 years old. I started as a waiter. But now I’m already 55. Maybe I would have tried working abroad If I were still 50,” he added.

Fabella tried his luck abroad seven years ago when he went to Libya to work as a chef in a hotel in Ajadabya in the northeast of that country. His job was to cook meals in nearby camps for various nationalities working in the oil fields.

“It was easier working there than here. The hotel was basically our training ground for what to cook in the desert,” he said.

“We had international cuisine, usually European. We had to cook food for Italians and the Maltese,” he added.

However, work got disrupted beginning in February as the Libyans began their uprising against their leader, Moammar Gadhafi.

On the early evening of February 28, Fabella and his fellow workers had to transfer from a satellite camp to their main camp near Ajadabya as the protests turned violent.

“A warehouse some 20 kilometers from our camp was burned down. We had to transfer to our main camp,” Fabella said.

“Night had fallen and we could hear them shouting and cursing Gadhafi. It was only then that they were able to vent out their anger,” Fabella said.

But when he got to the main camp at around 8 p.m., Fabella saw that their clients there—some 80 Italian workers—were packing up and preparing to leave.

“They left at 4 a.m., leaving us 12 Filipinos behind. We couldn’t leave immediately because our passports and salaries were still at the hotel,” he said.

Fabella  and the other Filipinos stayed two more days at the main camp, during which armed Libyans went on a looting spree.

“Even the computers that were left behind (by the Italians) were taken.

Fabella said that while the Libyans did not hurt them, they were hostile and told them to “go home.”

His employer finally arrived two days later and packed them into a pick-up truck for a four-hour drive back to Ajadabya.

“We couldn’t sit and had to stand up on the back of the pick up. It was too small for us.”

Back in the hotel, his employer tried to convince them to stay, promising a pay increase. But Fabella’s wife wanted him home.

“She was crying and worried about what she was hearing on the news. If it weren’t for my wife and family, I wouldn’t have come home,” Fabella said.

With gunfire ringing out “night after night,” Fabella said he and the other Filipinos at the hotel finally decided it was time to leave. They left for Benghazi, where a cruise ship contracted by the Philippine Embassy fetched them on March 6.

Back home but unemployed, Fabella said he hoped to change careers so he attended  the free basic IT training provided by the Bantay OCW Foundation Center.

He said he learned word processing, internet browsing, and typing. He also took a free course with the OWWA on computer hardware.

Fabella said he has already sent applications to at least three call centers.

“The problem is my listening skills and my English. I still need to practice. I have to work on my accent,” Fabella said.

Read Next
What the US debt ceiling debate means to a Filipino immigrant
EDITORS' PICK
Egg prices rise due to bird flu, increased holiday demand | #INQToday
18,529 out of 24,903 pass nursing board exam
The Best Tech Gifts For The 2022 Holidays
Marcos urges Filipinos to be like Bonifacio: honest, patriotic
The vivo Y16 makes the season of giving more thoughtful for the whole family
House energy committee chair Arroyo bats for cheap electricity
MOST READ
Mel Tiangco on co-anchor Mike Enriquez’s condition, ‘rivalry’ with Korina Sanchez
LOOK: Vina Morales goes to Boracay with mystery man
Marcos urges Filipinos to be like Bonifacio: honest, patriotic
Ref admits to cheating: How Manny Pacquiao snagged the win
Don't miss out on the latest news and information.