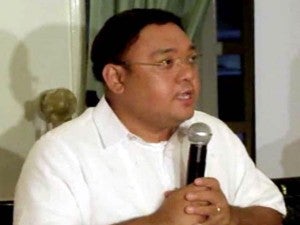 Harry Roque, chairman of the Center for International Law

MANILA, Philippines — The start of fisheries talks between the Philippines and Taiwan might violate the country’s one-China policy and Manila should instead craft any future pact with Taipei as a local government of China, an international law expert said.

Harry Roque, chairman of the Center for International Law, however, welcomed the decision of the two sides to avoid the use of force in fishing disputes — a positive step in what has been rough relations between the Philippines and what it considers a province of China.

“Talks may violate the one-China policy. All talks with Taiwan should be because it is part of China. The alternative is to craft as an agreement with a local government of China,” Roque said on Monday.

Roque, however, has a positive view of the agreement against the use of force in fishing issues, saying the right to life is above the right to use natural resources.

“But I welcome the agreement not to resort to use of force against illegal poachers. The right to life is preeminent and superior specially to mere ecological rights to explore and exploit natural resources,” he added.

The Philippines and Taiwan have “agreed in principle” not to use force to settle fishing issues, an initial pact following the Philippine Coast Guard’s fatal shooting of a Taiwanese fisherman in waters located within overlapping borders at the Balintang Channel off Batanes in May.

Up to three Taiwanese nationals are caught poaching in waters off Batanes every year, according to the Bureau of Fisheries and Aquatic Resources.

Roque earlier said the sea death was an “internationally wrongful act,” citing a provision under the United Nations Convention on the Law of the Sea that “prohibits the use of unnecessary force in dealing with illegal fishermen.”

The National Bureau of Investigation has concluded its investigation last week, recommending that members of the Philippine Coast Guard be charged criminally and administratively for firing at the Taiwanese fishing boat on May 9, killing 65-year-old Taiwanese fishing veteran Hung Shih-chen.

The Chinese Embassy in Manila has yet to comment on the issue.