QUNEITRA CROSSING—A first group of 67 Austrian troops in the UN force monitoring the Golan ceasefire line between Syria and Israel withdrew Wednesday, days after Vienna decided to quit the mission over security concerns.

Uniformed soldiers in jeeps and accompanied by armored vehicles entered the Israeli-occupied zone through the Quneitra crossing, the only passage between the two countries.

The troops, the first wave of the 378-strong Austrian contingent which is due to be pulled out in stages, then transferred to a fleet of white UN buses for the drive to Ben Gurion airport, near Tel Aviv.

They arrived in the evening at Schwechat airport, near Vienna, where they were greeted by Austrian Chancellor Werner Faymann and Defense Minister Gerald Klug.

Austria announced on June 6, after fighting at Quneitra between Syrian government forces and rebels, that it would withdraw its peacekeepers because of deteriorating security.

Klug said the pullout would take two to four weeks.

Austria has been a cornerstone of UNDOF, the UN force monitoring a ceasefire between Syria and Israel, since the force was set up in 1974.

UNDOF’s 900 members are armed only with handguns for self-defense. They come from Austria, the Philippines and India, following the withdrawal of contingents from Canada, Japan and Croatia.

UN leader Ban Ki-moon on Wednesday called for better protection for the peacekeepers against the growing threat from the conflict in Syria but said it was “essential” that the mission remain. 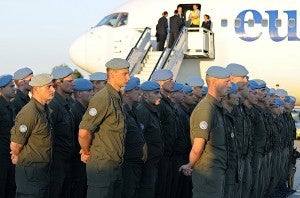 Austrian UNO soldiers arrive at Vienna International Airport in Schwechat, Austria on Wednesday, June 12, 2013. Austria announced it is withdrawing 377 UN peacekeepers from the Golan Heights after Syrian rebels briefly overran a crossing point near the border with Israel on Thursday, a development that has deepened concerns the civil war is spreading to neighboring countries. AP/HANS PUNZ

Ban called on the UN Security Council to consider measures to beef up the force. “These include, as a matter of priority, enhancing the self-defense capabilities of UNDOF,” he said in a report.

“It is also necessary to consider further adjustments to the posture and operations of the mission.”

The UN Security Council is to meet with troop contributing countries on Thursday and plans to vote on a new mandate for UNDOF on June 26.

Ban said the United Nations is “urgently” seeking reinforcements and that the force should be bolstered to 1,250 troops.

Fiji is sending 171 troops this month, who would replace the Croatian and Japanese contingents, according to the UN report.

It has offered several hundred more soldiers, according to diplomats in New York.

Ban said Syria was guilty of a “grave violation” of the ceasefire accord and that Israel was guilty of a “serious violation,” warning that mounting tensions could “jeopardize” the agreement that formally separated the two sides following the 1973 Arab-Israeli war.

Moscow has offered to send Russian troops to bolster the depleted UNDOF.

But under the terms of the 1974 agreement which established the peacekeeping force, no troops from the five permanent members of the Security Council can participate.