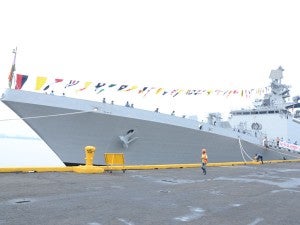 One of the four Indian Navy ships on a five-day goodwill visit in the country. CONTRIBUTED PHOTO/Philippine Navy

MANILA, Philippines—Four ships from the Indian Navy are in Manila for a five-day goodwill visit, the Philippine Navy said Wednesday.

The ships, which are under the Command of Rear Admiral P Ajit Kumar, the Flag Officer Commanding Eastern Fleet (Focep), were: INS Saptura, a Shivalik-class stealth multi-role frigate, INS Shakti (A57), a Deepak-class fleet tanker, INS Ranvijay (D55), a Rajput class destroyer, and INS Kirch (P62), a Kora class corvette. Each ship is commanded by a Commanding Officer (CO).

Before the welcome ceremony, a briefing for the Indian ships was conducted by Navy ship BRP Emilio Jacinto (PS 35) as they reached the vicinity of Corregidor Island, the Navy said.

The visit will involve port briefings, courtesy calls, receptions, shipboard tours, passage exercise and goodwill games involving Philippine and Indian Navy counterparts. The said activities will help enhance the skills and expertise and foster a bond of friendship between the two navies.

The ships arrived Wednesday and will stay in the country until June 16, Saturday.

Indian Navy Vice Admiral Anil Kumar Chopra, the Flag Officer Commanding-In-Chief of Eastern Naval Command will be in the country for an official visit to the Philippines on June 15 to June 18. His stay will involve courtesy calls, visits to Corregidor and Intramuros, as well as the Philippine military’s Central Command and Naval Forces Central in Cebu.