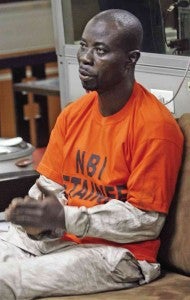 MANILA, Philippines—Something the man ate had obviously disagreed with him—given his obvious discomfort—but authorities had no idea what it was until an x-ray test showed 60 capsules, which contained more than 700 grams of methamphetamine hydrochloride, or shabu, inside his stomach.

Akilou Bassi, a 30-year-old African citizen, was arrested at the airport on Friday after he admitted to National Bureau of Investigation (NBI) agents that he swallowed the thumb-sized capsules in an attempt to smuggle the drugs valued at more than P2 million into the country.

Head agent Ross Galicia of the NBI’s Reaction Arrest and Interdiction Division said that since his arrest, Bassi has passed just 36 capsules.

“He is trying to stop himself from passing the rest by not eating or drinking anything,” Galicia told the Inquirer.

He added: “He said he would give up the remaining capsules only if he is brought to the airport and deported to his country of origin.”

Ruel Lasala, NBI deputy director for investigative services and head of the bureau’s anti-illegal drugs task force, said that Bassi had already been formally charged in court with “transport of illegal drugs.” 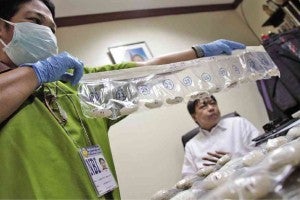 National Bureau of Investigation Reaction Arrest and Interdiction Division head agent Ross Galicia presents to reporters some of the 60 capsules containing shabu found in the stomach of West African Akilou Bassi, a confessed drug mule who was promised $4,000 to smuggle the drugs into the country. NIÑO JESUS ORBETA

“The offense carries a penalty of life imprisonment,” he added.

Galicia said Bassi arrived on Friday morning in Manila but was held by Bureau of Immigration agents and turned over to the NBI after he could not tell them where he would be staying or if there was anyone who would be putting him up.

The NBI, meanwhile, had earlier placed him under surveillance after they received information that he was a drug mule for the West African Drug Syndicate in the hopes that he would lead them to his contact here in Manila.

After he was turned over to NBI agents, Bassi complained of stomach ache and was brought to the Philippine General Hospital for an examination.

When an x-ray test showed thumb-sized objects in his stomach, Bassi confessed that he had swallowed 40 capsules that contained shabu. The rest, he told the NBI, were inserted through his anus, which explained why he was having difficulty sitting down.

Galicia told the Inquirer that while smuggling illegal drugs by ingesting these was common in other countries, this was the first such case in the country.

Bassi said the drug syndicate had promised to pay him $4,000 “for a successful delivery.”