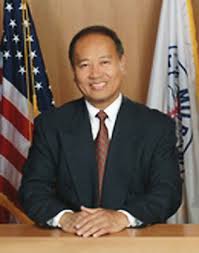 MILPITAS, California–Five-term Mayor Jose Esteves, a Filipino American, told hundreds of constituents at his very first State of the City address May 30 that the city was in a better position compared with others in Northern California.

“Let me say plainly that our current financial standing is +AA and our outlook is very positive,” Esteves told the standing-room-only crowd at the Chamber of Commerce venue.

“I don’t want to move ever,” said Deritha May Randall has lived in Milpitas for 50 years. “Thank God for the (Milpitas) Police and Fire Departments. The mayor is good and has improved Milpitas more than any man, especially in the Dixon area (where she lives). Mayor Esteves has got it under control.”

Esteves admitted, however, that the last seven years were the most difficult in the city’s history. Tough decisions and sacrifices had to be made, he said, for Milpitas to become financially solvent. “We cut costs internally and redefined our service delivery without compromising it. This is an accomplishment not all cities can claim,” he explained.

But the solvency came at a price. In the last year, the city council had to cut $9.2 million from the $69.2 million general fund in June, as a result of State’s decision to eliminate redevelopment agency funding. This forced the city to cut its expenses by $7 million on top of a $2.2 million structural deficit.

Like most cities, Milpitas residents and businesses felt the impact of reduced public works maintenance and recreation programs, reduced police and parks protection, a halt to repairs, cuts in service hours in libraries and limited ability in code enforcement activity.

Milpitas “had to make the unpopular but necessary decision to cut costs, live within our means without asking for more from our taxpayers.” This meant a 15 percent reduction in wages and benefits of the city’s full-time employees. To monitor city costs, Esteves revealed a “two-tier system pension plan for new employees” and secured the cooperation of the employees’ unions.

But Esteves said city officials shared the burden: “With our already low compensation, Milpitas’ elected officials agreed to a 10 percent salary reduction and the removal of our medical benefits, which could be something like $20,000 a year.”

Funding school resources and increasing the crossing guards’ salaries are also among the city’s goals. In the long run, Esteves explained, “the city plans to manage its employees’ benefit reduction to a better ratio so that city employees’ salaries can still be competitive with the private sector.”

A few projects, however, are on hold because of the lawsuit: the 250-room A-loft hotel at Tasman Drive, the new park development north of the library, the new 11-acre sports field and elementary school and the affordable senior housing home at South Main.

The city also backed the expansion of Walmart (by California State Route 237) and the Great Mall’s new stores. Milpitas counts on hotel sales and tax revenues, including shares in advertising revenue from billboards. Esteves also announced what “could be the largest Asian Mall in the region,” a development project for what will be known as the Pacific Mall of Milpitas at McCarthy Ranch.

BART (Bay Area Rapid Transport, a commuter mainstay) is scheduled to run through Milpitas in the next two years. Esteves said the area around the BART stop is suitable for development.

The mayor bragged that Milpitas was in the forefront of commercial development “because it has the most efficient and streamlined permit processing record in the Bay Area.” Building permits can be accessed on-line, including paying fees, status checks, scheduling inspection and customer surveys.

“More than 95 per cent of customers (surveyed) rate Milpitas’ city services as excellent and better than other cities,” Esteves said.

The city’s building codes are well enforced and up to date. As a result, safer buildings have given it better insurance rates. “Milpitas got the highest rating of +1 from the (New Jersey based) Insurance Service Office (ISO),” said Esteves. “Milpitas has better pavements than most of the cities around us,” he added.

Saving the best for the last, Esteves said serious crimes have fallen more than three per cent. “Compare that to areas around us where crime has increased by 24 per cent.” Average emergency response time is “2 minutes, 36 seconds.”

Esteves, whose family has lived in Milpitas for 33 years, joked that he worried that he might have overestimated attendance at his speech when he asked for 200 seats. But he was delighted to be wrong.

“Mayor Esteves is always supportive of community events like the Haiti earthquake and children with special needs (fund-raising events),” Dr. Hwa Lim, a biotech specialist said. “Just the votes for him alone–70 percent–shows you how popular he is.”

Kansen Chu, nearby San Jose District 4 Council member and guest at the address, said, “Mayor Esteves is hard working and represents Milpitas well. I’ve run into him so many times: the Chinese school, the teachers association dinner, the Taiwanese Chamber of Commerce, the Vietnamese flag-raising and even some Hindu-American events.”

“I highly endorse Mayor Esteves,” said Delia Ho, another resident of San Jose. “I’ve known him for 30 years. We were both county employees and members of the Filipino-American Public Employees of Santa Clara Country. I’m proud of him. He’s driven, determined and intelligent. He has the ability to see both sides of an issue. He is not going to be tied to somebody’s politics and certainly not to special interest groups. I hope he goes on to state assembly–I will campaign for him.”