P420M worth of elephant tusks to be crushed, burned by DENR on June 21 | Global News
Close
menu
search

P420M worth of elephant tusks to be crushed, burned by DENR on June 21 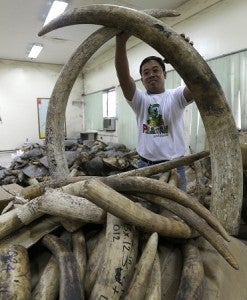 MANILA, Philippines — The Department of Environment and Natural Resources (DENR) is set to crush and burn some P420 million (US$10 million) worth of seized elephant tusks to show the country’s support for the global campaign to end the illegal trade of wildlife species.

The five tons of ivory are part of the total cargo of elephant tusks intercepted by customs officials since 2009 in separate operations nationwide. These are stored in the Protected Areas and Wildlife Bureau (PAWB).

The ivory will be crushed by a steam roller before they are burned in June 21 rites at the Ninoy Aquino Parks and Wildlife Center, according to Environment secretary Ramon Paje. Foreign experts and anti-ivory trade advocates are anticipated to witness the event, one of the highlights of the environment month celebration.

In a statement, Paje said, “Our decision to destroy these ivory tusks that entered the country illegally is to show to the whole world that the Philippines will not tolerate illegal wildlife trade.”

The country is a signatory to the 1989 Geneva-based Convention on International Trade in Endangered Species (CITES) of flora and fauna, which bans the ivory trade as a cause of the massive decline in elephant populations in Africa, according to Paje. PAWB is designated as the management authority under the Wildlife Resource Conservation and Protection Act.

Under the CITES, elephants are highly endangered and their international trade declared illegal. The demand for ivory on elephant tusks have caused the slaughter of the animals.

In 1997, the Philippines was included among nine countries of priority concern as a trade route and transit site of the illegal ivory trade along with Hong Kong, Malaysia and Vietnam. The other countries are the sources of elephant tusks: Kenya, Tanzania, and South Africa; and countries of destination China and Thailand.

Top executives of the justice department, the National Bureau of Investigation, the Customs Bureau, the National Intelligence Coordinating Agency and the Philippine National Police are also anticipated to participate in the event.

National Geographic investigative journalist and former Washington-based international lawyer Bryan Christy, who wrote a report in 2012 on the ivory trade in the country, is expected to give a presentation on the global trade on elephant tusks.