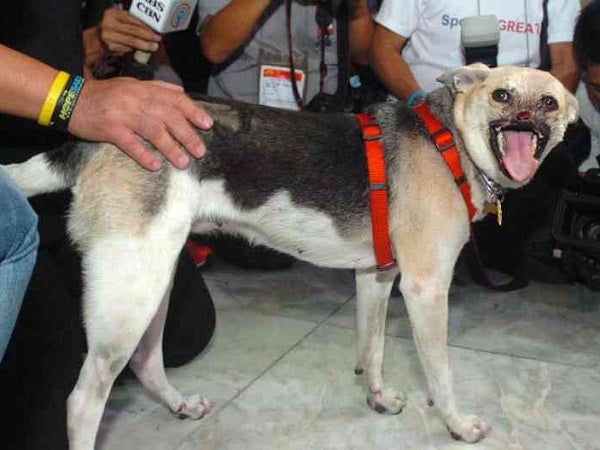 MANILA, Philippines—Hero dog Kabang, a mixed-breed who lost half her face saving the lives of two girls, was mobbed like a rock star upon her return early Saturday morning from the United States, where she underwent medical treatment for eight months.

Members of the media flocked to Kabang as soon as she was cleared by quarantine personnel and let out of her cage at the arrival section. The dog appeared initially startled by the pop and flash of cameras but became friendly and playful as Lim and the reporters soothed her.

Many passengers and airport employees who were in the area cheered and applauded while others were teary-eyed as Kabang passed by them. They also took snapshots of the dog using their cell phone and table cameras. Some even posed with the dog for a souvenir shot.

“She’s as normal as she can be. She doesn’t need any special medication. So aside from the aesthetic, she’s normal,” Lim said when asked how Kabang was faring, even with her snout and upper jaw missing.

The dog was present at a press conference held by local members of Team Kabang, composed of the Animal Welfare Coalition and other groups that helped raise funds for the dog’s operations, later in the morning. Kabang was to return to her owner in Zamboanga City this afternoon.

“The most difficult was the operation to close the nostrils. The wound was covered so that she would no longer need antibiotics,” Lim said.

The veterinarian thanked donors from 45 countries who helped fund Kabang’s treatment at the University of California (UC), Davis, with $27,000 in donations raised in the Philippines and abroad.

“It is very fulfilling that at least our hope in humanity is restored,” he said, adding that Kabang has become a symbol of “unconditional love” shown by a human being toward his or her pet.

“If you give unconditional love to your dog, of course they will give it back to you. So, she saved two lives so the whole world actually came together to save her, so it is really a very nice symbol for everyone,” he said.

Although Kabang will be spending time with her owner, Rudy Bunggal, Lim said the dog, as soon as she settled down, would embark on a mission.

“She’s a hero not just in the Philippines but all over the world. So what we’re planning is to make her an ambassador of ‘dog-will’ and promote responsible pet ownership,” Lim added.

Kabang’s snout and upper jaw were sheared off in December 2011 when she jumped into the path of a motorcycle, stopping it from running over her owner’s daughter and niece in a southern Zamboanga city.

She was later flown to William R. Pritchard Veterinary Medical Teaching Hospital in UC-Davis to undergo surgery to close her wound.

UC-Davis veterinary professor Frank Verstraete said doctors at the hospital performed surgery to heal her wounds but they could not reconstruct Kabang’s jaw or snout.

Doctors had to first treat her for other ailments, including a tumor and heartworm, to ensure her wounds would heal. They took skin from her cheeks, neck and forehead to cover up sensitive areas that were exposed on her face during surgery in March, Verstraete said.

Kabang won widespread sympathy because of her injuries from what has been described as a heroic act. A nurse from Buffalo, New York, spearheaded a fund-raising campaign to bring Kabang to the US because Philippine veterinaries could not treat her.

Lim said a parade is planned for Kabang’s homecoming Sunday in Zamboanga.

True to her celebrity status, Kabang also had sponsors and is expected to do endorsements.

According to the Facebook page “Care for Kabang,” the UC-Davis medical team sent Kabang home with a year’s supply of heartworm, flea and tick prevention medicine courtesy of Pfizer. Pet food manufacturer Pedigree will also give a lifetime supply of food to Kabang. The Philippine Airlines Foundation also shouldered the dog’s plane fare.

Other companies in the US that helped Kabang were Hertz Rental Car, Hallmark Inn of Davis and O’Brien Animal Transportation.

The Facebook announcement clarified that Kabang will remain with her owner and that the dog has not been adopted by Lim.

“[Lim] will be there for her and Rudy for the rest of her life. For those of you not in the Philippines, understand that Kabang is a major celebrity there and she will, undoubtedly, go on a VIP tour of the country to support education on proper animal care and animal rights. She will not be neglected and will be treated very well. Her life will be happy and healthy. Thank you all for coming along with us on this amazing journey. None of it could have happened without your support,” the announcement stated. With a report from AP