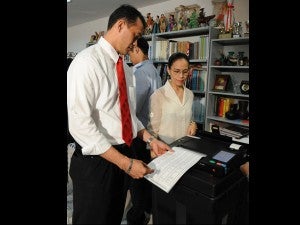 A Filipino election clerk conducts the final testing and sealing of the Precinct Count Optical Scan (PCOS) machines ahead of the Philippines’s 2010 National Elections for Overseas Absentee Voting at the Philippines Embassy in Singapore on April 7, 2010. The number of Filipinos abroad who have registered as overseas absentee voters for the 2013 elections has reached over 900,000, said Senator Aquilio Pimentel, chairman of the Senate committee on electoral reforms and people’s participation. AFP FILE PHOTO

MANILA, Philippines—Overseas Filipinos will no longer be required to swear under oath that they would return to the country within three years before they could be allowed to cast ballots in Philippine elections, the Commission on Elections has announced.

In a statement, the Comelec said the legal requirement that overseas Filipinos execute an “affidavit of intent to return” before they are allowed to cast their votes for candidates in the Philippines has been dropped from the overseas absentee voting  law.

“The requirement was regarded by Filipino migrant groups as the biggest stumbling block to registering the broadest number of qualified Filipino overseas voters,” the Comelec said.

The election body said the requirement was dropped after President Benigno Aquino on May 27 signed Republic Act No. 10590, which amended the absentee voting law.

“Under the amended law, Filipino immigrants and permanent residents shall no longer be required to execute an affidavit declaring that they shall resume actual physical permanent residence in the Philippines not later than three years from approval of their registration,” the Comelec said.

Data from the Philippine Overseas Employment Administration  showed that the number of Filipino permanent residents abroad had reached 4,056,940 as of 2009.

Jimenez also welcomed the provision in RA 10590 that would utilize the pre-departure orientation seminars to support the overseas voter registration and voting processes.

Jimenez said that under the amended law, overseas voters would be able to cast their votes for all national referendums and plebiscites aside from the presidential, vice presidential, senatorial and party-list elections.

The law also calls for the creation of an Office for Overseas Voting  under the Comelec whose job it would be “specifically to oversee and supervise the effective implementation of the Overseas Voting Act,” he said.