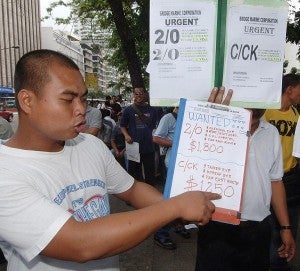 A recruiter displays a signboard offering jobs to Filipino seamen, complete with salaries at a park in Manila in this file photo. The Philippines has yet to fully address two of the three maritime issues a European audit team raised back in April, with barely four months to go before the team returns for another inspection. AFP PHOTO Joel NITO

MANILA, Philippines—The Philippines has yet to fully address two of the three maritime issues a European audit team raised back in April, with barely four months to go before the team returns for another inspection.

With the jobs of around 80,000 Filipino seafarers on European-flagged vessels at stake, and a possible European Union (EU) ban on the hiring of Filipinos, Maximo Mejia Jr., the newly appointed head of the Maritime Industry Authority (Marina), said there was still work to be done before the European Maritime Safety Administration (Emsa) team returned for a final audit in October.

The team will check on the progress made since its last audit on April 16-19 by Marina, the Professional Regulation Commission (PRC) and the Commission on Higher Education (CHEd), the agencies involved in maritime education, certification and training in the country, the issues that Emsa had raised.

Emsa conducts the audits since the Philippines is a party to the 1978 International Convention on Standards of Training, Certification and Watchkeeping for Seafarers.

At a news forum in San Juan City on Wednesday, Mejia said that although a national quality standard system on maritime education, certification and training had been developed, this had yet to be tested.

“We have developed this already but (Emsa) said, ’You haven’t tested it (in maritime schools).’ And that’s what we’re going to do,” said Mejia, adding that this would begin sometime in July.

He said that aligning the standard systems of the CHEd and PRC with the national system was also “pending.”

Despite the admission, Mejia said he was “confident” the maritime industry would fully satisfy the concerns of the foreign audit team before it arrives to inspect the maritime schools.

Philippine authorities, for example, he said, had managed to bring down the number of qualified maritime assessors from 75 to 25, fully addressing Emsa’s third concern—that there was an apparent conflict of interest among the evaluators, students and the schools being assessed.

“We are continuing with our preparations. (All agencies concerned) have been working hard,” Mejia said.