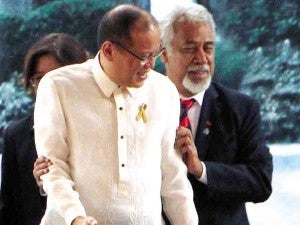 Aquino hosted a luncheon in Malacañang for Gusmão and his delegation following a wreath-laying rite at the monument of national hero Jose Rizal.

The two leaders vowed to forge stronger bilateral ties and witnessed the signing of memorandums of understanding on education, public works and foreign affairs, but future cooperation in Asean seemed topmost in their minds.

Aquino said Gusmão’s visit came at a very important time for both countries “as we focus our efforts in fostering greater cooperation and solidarity” in Southeast Asia.

“On this note, allow me to express the Philippines’ support for Timor-Leste’s bid to join the Asean community,” Aquino said as he and the visiting premier faced the press.

“We look forward to working more closely with you in the future in advancing regional dialogue, which we know will redound not only to the growth of our people and our countries, but will also contribute to the stability and continued development of our region,” Aquino added.

“Timor-Leste is seeking membership in Asean as we believe we can contribute to this dynamic and growing region to which we all belong. We look forward to joining with the Philippines in the Asean family,” he said.

Gusmão said he would be leaving on Sunday “with renewed confidence and hope that the strong ties of friendship and solidarity between our peoples will carry on and that our dynamic partnership will continue to strengthen in the future.”

At the close of their 22nd summit in Brunei in late April, Aquino and other leaders of Asean expressed support for Timor-Leste’s bid.

Asean Secretary General Le Luong Minh had said that the group was studying Timor-Leste’s bid, stressing that this relatively new nation in Southeast Asia must meet its obligations under Asean’s economic, political and sociocultural pillars.

Timor-Leste, comprising the eastern half of Timor island, was annexed by Indonesia in 1975 and declared its independence in 2002. It filed an application for Asean membership in 2011.

At Thursday’s press conference, Aquino said the Philippines and Timor Leste had been working for the past 11 years to turn a “vision of mutual prosperity and peace” into reality for both their peoples. He thanked Gusmão for his government’s $750,000 aid for the victims of Typhoon “Pablo.”

The MOUs that were signed Thursday involved Philippine public works officials helping to build the capabilities of Timorese public works personnel in infrastructure planning, quality control and maintenance; the Philippine Normal University helping to devise a program for training Timorese education officials; and establishing a bilateral mechanism between the foreign ministries of both countries.

“Today, we witnessed the signing of a memorandum of understanding between the Philippine Normal University and the government of Timor-Leste, the objective of which is to enhance the training of Timorese teachers. This is part of our efforts to deepen cooperation in education between our nations,” Aquino said.