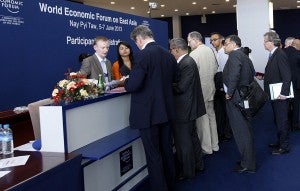 Participants gather at a reception of the Myanmar International Convention Center where the three-day World Economic Forum on East Asia is being held in Naypyidaw, Burma, Wednesday, June 5, 2013. President Aquino will join some 1,000 leaders and delegates to the WEF. AP PHOTO/KHIN MAUNG WIN

RANGOON, Burma—President Aquino will join some 1,000 leaders and delegates to the 2013 World Economic Forum (WEF) on East Asia, which opened Wednesday in Naypyidaw, the new capital of Burma (Myanmar), to discuss how emerging and fast-growing economies in the region such as the Philippines can become better connected through improved infrastructure.

The Swiss-based WEF, which brings together powerful world figures to discuss pressing issues, is holding one of its regional summits this year in Burma, until recently a pariah, military-ruled state but which is now opening up to the world, with its challenges and opportunities for the region, particularly Burma’s partners in the Association of Southeast Asian Nations (Asean).

The three-day 22nd WEF with its themes—inclusive transformation, regional integration, regional solutions for global resilience—highlights the issues facing Burma and its neighbors and sets the stage for re-engagement with the rest of the world.

Sushant Palakurthi Rao, denior director, head of the WEF Asia forum, said the transformation issue is very important as it speaks of what is happening in Burma, with its ongoing reform process,

The inclusion part, he said, is the fact that while investments are expected to accelerate in the months and years ahead in Burma, it is important to signal early on that this investment must be leveraged responsibly for equitable growth and for inclusive growth.

“That is very much at the heart of what we are discussing at this meeting. Finally the integration part of the agenda has to do with the fact that Myanmar will chair Asean for the very first time in 2014,” Rao said.

Burma assumes the chairmanship of Asean in 2014 and will have a critical role in guiding the bloc’s 10-member economies towards Asean’s planned economic integration in 2015.

Rao said tight security measures have been put in place to secure world leaders who will be attending, including Aquino.

Rao said organizers had to work closely with the Burmese government on accessibility issues in Naypyidaw.

From June 5 to 7, a record 900 participants from 55 countries will meet in Naypyidaw, a remote city about five hours’ drive from Rangoon built from scratch in the mid-2000s by the military junta that had ruled Burma for decades.

The 22nd WEF is the first leading international gathering of senior decision-makers from industry, government, academe and civil society to be held in the country.

This year’s meeting is larger as it has gone up almost by 300 participants as against last year’s attendance, Rao said.

A higher percentage of representatives from civil society participating in this year’s meeting was noted, a reflection of the importance that is being laid on social development issues and economic development issues for Burma going forward, he  said.

The Philippines and Burma established diplomatic relations on Sept. 29, 1956. President Fidel Ramos visited Burma in 1997 and Senior Gen. Than Shwe of the ruling junta came to the Philippines in 1998.

The WEF, founded in 1971 and headquartered in Geneva, Switzerland, is an independent, international organization committed to improving the state of the world by engaging leaders in partnerships to shape global, regional and industry agendas. It is impartial and nonprofit and is tied to no political, partisan or national interests.

Every year, WEF regional meetings are held in Africa, East Asia, Latin America and the Middle East. The mix of hosting countries varies from year to year, but China and India have hosted consistently over the past decade.—Cynthia D. Balana

Read Next
Media killings still ‘major concern’
EDITORS' PICK
Nograles: Cabinet members to donate 75% of monthly salary to aid COVID-19 fight
Quick chat with Nicole Andersson: ‘You really don’t need much to be happy’
IATF to LGUs: Issue ordinances vs attacks on frontliners, COVID-19 patients
Diokno to Duterte: OK to make fun of buck tooth, but focus on people’s needs first
Robredo spox thanks Duterte for defending VP’s efforts vs COVID-19
10 Filipinos positive for COVID-19 in UK, 7 in Ireland — envoy
MOST READ
Gov’t mulling quarantine period extension of 15-20 more days
Sotto on Isko Moreno’s call: We do our job without the media following our every move
ADB warns PH against prolonged lockdown
Cook more and eat less: Tips on your quarantine diet
Don't miss out on the latest news and information.