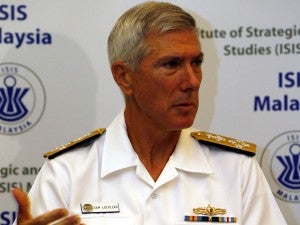 KUALA LUMPUR, Malaysia — The U.S. will oppose moves by any country to seize control of disputed areas in the South China Sea by force, the top American military commander in the Pacific said Wednesday, adding that rival claimants might need to seek compromises to resolve the feud over potentially oil-rich territories.

Adm. Samuel Locklear, commander of U.S. Pacific Command, did not mention any country by name, but China’s increasingly aggressive claims to disputed islands have triggered worries about confrontations with others including the Philippines, Vietnam, Malaysia and Brunei.

“We will oppose the change of status quo by force by anyone,” Locklear told reporters during a visit to Malaysia. “We need to retain the status quo until we get to a code of conduct or a solution by party nations that is peacefully accepted.”

Southeast Asian governments want a legally binding code of conduct with China to deter hostile actions and prevent fighting. But Beijing has not clearly said when it would discuss the proposal.

Locklear said the U.S. would not take sides but added that a code of conduct that enables maritime officers “to understand the boundaries of what they can do (would be) in the best interest for a peaceful solution.”

He nevertheless said tensions were unlikely to escalate badly because the countries “understand this could be a long process, they understand restraint.”

China has sought to resolve disputes through bilateral negotiations, but some of the countries want multilateral talks, feeling Beijing’s size is too much of an advantage in direct talks.

“It seems to me that when you have a collective perspective, it is more viable in the long run,” Locklear said. “You can’t get through a complex situation without give and take. So I think in the long run, there will be a compromise.”