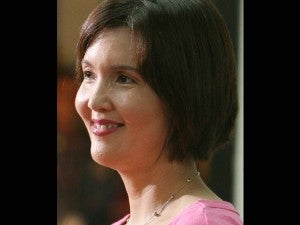 MANILA, Philippines—An international women’s conference organized by the Bill and Melinda Gates Foundation last week gave Sen. Pia Cayetano its Rising Star Award for her efforts in the passage of the reproductive health (RH) law in the Philippines.

Cayetano was recognized for standing up for women’s health and rights at the 3rd Women Deliver Conference in Kuala Lumpur, Malaysia, which focused on promoting women’s well-being.

Fitzgerald wrote on the website of the Gates foundation that Cayetano took on the task of pushing for the RH bill—which had been languishing in the Philippine Congress for five years—when she became the youngest woman senator in 2001.

Fitzgerald cited Cayetano’s sponsorship of the Responsible Parenthood and Reproductive Health Act that was eventually passed in 2012.

The law “ensures all women and men in the Philippines can freely and responsibly decide the number and spacing of their children, and have the information and means to carry out their decisions.”

This is a highlight of the international Convention on the Elimination of All Forms of Discrimination Against Women (CEDAW) which is recognized by almost all countries.

“It’s a little hard to imagine, but this bill, which guarantees a pretty basic set of rights, was incredibly controversial in the Philippines. Proponents of the bill were publicly attacked and were called ‘agents of death,’” Fitzgerald wrote.

Fitzgerald interviewed Cayetano in a panel discussion during the Women Deliver conference and “the story she told was one of resolve in the face of adversity, abiding by scientific evidence and facts, and staying positive against an onslaught of personal attacks and misinformation.”

“Her training as a triathlete kept her going through difficult times—she knew she had the endurance to outlast her opponents and to keep the finish line in sight,” Fitzgerald said.

In the Senate, Cayetano was backed up by coauthor and senior lawmaker Miriam Defensor-Santiago. In the House of Representatives, Rep. Edcel Lagman (Albay) and Janette Garin (Iloilo),among others, fought it out with allies of the Roman Catholic Church in the Philippines who are against giving women access to modern contraceptive devices.