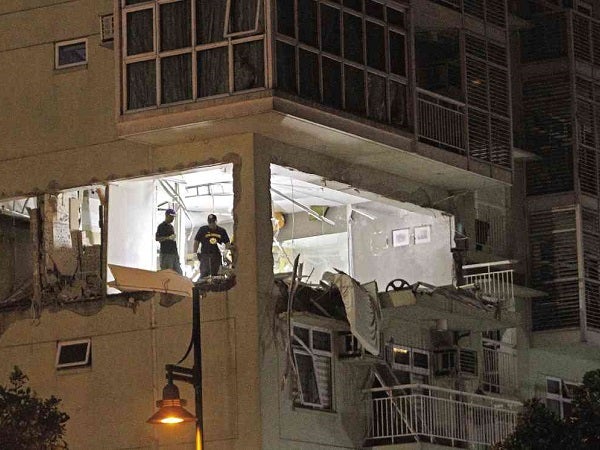 BLASTED This is the aftermath of the blast that ripped through Unit 501B of Two Serendra at Bonifacio Global City on Friday night. RAFFY LERMA

The investigation on Saturday of the explosion that ripped through a posh apartment building in Taguig City on Friday night began to center on the renter of the unit where the blast occurred, as President Benigno Aquino III ordered probers to find out what caused the explosion that killed three people and injured five others.

The blast blew out the walls of an apartment on the fifth floor of Two Serendra in Bonifacio Global City, sending a slab of concrete flying onto the street below and smashing into a passing delivery van.

The van’s driver and two of his crew were crushed to death.

Five others, including an American and a 9-year-old, were injured.

The National Disaster Risk Reduction and Management Council (NDRRMC) earlier reported that three others had been killed in the building but later said that was wrong.

NDRRMC Chief Eduardo del Rosario told the Inquirer that civil defense officers on the scene had made a “double count” and that his office had apologized for the mistake.

Maj. Reynaldo Balido, spokesperson for the agency, said the only fatalities were those in the van, adding that local civil defense officials mistakenly reported the deaths in the building.

Hours after the explosion, which happened at around 8 p.m. on Friday, President Aquino and Interior Secretary Mar Roxas went to the Serendra condominium complex surrounded by restaurants and shops frequented by Manila’s upper class and expatriate community in Taguig City.

The President supervised the initial response of police and civil defense agencies and left at midnight, leaving Roxas to tell reporters that Mr. Aquino had ordered all agencies concerned to cooperate in the investigation to determine the cause of the explosion. 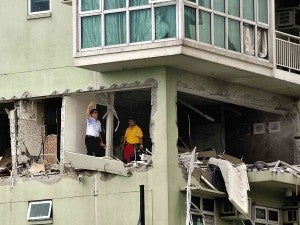 MORNING AFTER From the same angle on Saturday morning, Interior Secretary Mar Roxas is shown inspecting the damage of the blast that ripped through Unit 501B of Two Serendra at Bonifacio Global City. RICHARD REYES

Roxas urged the public to refrain from speculating if the explosion was linked to recent travel advisories issued by the United States, British, Canadian and Australian governments for the restive southern Philippines, where they cited a risk of kidnappings and terrorist activities.

Terrorists have targeted Metro Manila in the past, but most attacks have been confined to the far south, where al-Qaida-linked bandits, the Abu Sayyaf, operate.

Deputy presidential spokesperson Abigail Valte said Saturday that Mr. Aquino wanted an explanation for the explosion that would “stand the scrutiny of anybody.”

The counterterrorism division of the National Bureau of Investigation on Saturday joined the probe of the blast, but Director Nonnatus Rojas declined to discuss with reporters details of the division’s role, saying only that explosives experts had been picked for the job.

But Roxas said on Saturday that three separate teams of bomb-sniffing dogs from the police and the military were combing the wrecked apartment and the debris but so far had not found any indication of explosives.

“We are not saying that this was not caused by a bomb, but this is factual—these three teams did not register any fumes or residue of ordinary bombs,” Roxas said.

“Right now, we still do not know what caused the explosion,” he added. “We are not ruling out anything.”

Just meters behind Roxas was the wrecked apartment 501 B, rented by Angelito San Juan, who was reportedly leaving the place when the explosion occurred.

Roxas said San Juan suffered burns on his back, and was under intensive care at St. Luke’s Medical Center in Global City.

While the cause of the explosion remained a mystery, investigators said they were looking into another mystery, how San Juan survived the powerful blast.

Sources at Serendra said San Juan was just renting the apartment for nine days from the owner, whom they identified as George Cayton, an overseas worker.

But the sources had no information about San Juan’s origins or the whereabouts of Cayton.

Authorities were initially looking into a gas supply issue, and residents were kept out of other buildings in the complex as officials checked the supply maintenance.

Investigators were also looking into early reports of a faulty appliance that might have caused the explosion, but Serendra sources said not until San Juan could be interrogated could the probers determine what really happened.

Roxas said investigators were interviewing the injured and witnesses to establish the “sequence of events.”

According to Roxas, initial investigation found that apartment 506 had a used fire extinguisher, but probers had not established whether it had been used before or after the explosion.

One floor below, apartment 306 (Serendra does not have a designated fourth floor) had “burn marks,” Roxas said.

A resident, who spoke on condition of anonymity, said the explosion was “like a lightning strike.”

The resident said that after the explosion, he smelled “burning electronics.”

Roxas said experts were “calculating” the force of the explosion, which sent debris flying across a wide area.

The explosion was so powerful that concussion cracked the glass door of a bank located 100 meters from Two Serendra.

Police cordoned off McKinley Parkway Road and a huge portion of the parking lot of a shopping mall adjacent to the Serendra complex where pieces of broken glass were scattered.

Nearby, forensic investigators in white overalls and blue rubber sandals scoured the area for debris that might give clues to what caused the explosion.

Tony Aquino, president of Ayala Land, said 35 apartments in the building were occupied at the time of the blast.

Roxas said all the residents had been evacuated and would not be allowed to return until authorities had given assurance that the building was structurally sound.

Ayala Land said certain sections of Two Serendra had been cordoned off as investigators went about their job.

The property owner said in a statement that it could not draw any conclusions about the blast, but gave assurance that it was working with the authorities to find out what caused the explosion.

“The families of those who died will be provided with the necessary assistance,” the company said.

Crushed to death in their delivery van were driver Salimar Natividad and his crew Jeffrey Umali and Marlon Bandiola.

They were taken to St. Luke’s Medical Center.

Poole, a resident at Serendra, was hit by broken glass and remained in hospital, Roxas said.

Lorenzo and Bondoc sustained minor injuries. They had been discharged, Roxas said.

Garcia was traumatized, but was discharged by midnight on Saturday, Roxas said. With reports from Nancy C. Carvajal, Jaymee T. Gamil, Doris Dumlao and AP