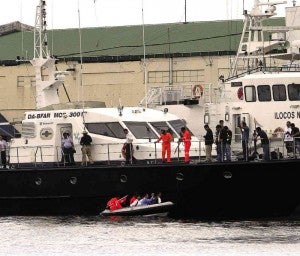 Taiwanese investigators use a rubber boat in Manila’s South Harbor to inspect the hull of the Bureau of Fisheries and Aquatic Resources ship involved in the shooting death of a Taiwanese fisherman in the Balintang Channel earlier this month. The Taiwanese are here while NBI investigators are in Taiwan to make a parallel investigation. INQUIRER FILE PHOTO

TAIPEI – Taiwan investigators have identified the gun used in the fatal shooting of a Taiwanese fisherman by Philippine coastguards, an official said Saturday, amid conflicting media reports on whether the shooter had confessed.

Taipei and Manila swapped teams of investigators on Monday following weeks of acrimony in a bid to settle controversy over the incident that has severely strained ties between the two sides.

A team of Taiwanese investigators have concluded that two guns were used to shoot at the fishing boat, including a M14 rifle suspected of firing the fatal shot, said Taiwan’s state-funded Central News Agency citing unnamed officials.

The report also said the shooter, who was not named, has been identified and that he had confessed to opening fire.

However Taiwan’s Apple Daily said no Filipino coastguard had admitted to using the M14 rifle.

Eight Filipino coastguard members admitted to opening fire but said they shot at the sky or into the sea rather than the fishing boat, reported the newspaper.

A Taiwanese prosecutor in charge of the case told AFP the gun used to fire at the fisherman has been identified but declined to comment on the suspected shooter.

The team from Taiwan, which returned from Manila on Friday, was allowed to examine the Filipino coastguard vessel and interview the coastguards involved in the May 9 encounter, as well as being granted access to the firearms.

The Philippines has insisted the Taiwanese fishing boat intruded into its waters and that coastguards were forced to open fire when it tried to ram their vessel.

Taiwan has rejected this account, insisting the fishing boat was within its exclusive economic zone.

The National Bureau of Investigation (NBI), the Philippine justice department unit investigating the shooting, has yet to release its findings.

“If the NBI finds any administrative or criminal liability, I would not want to preempt them. They will make appropriate recommendations and that may include criminal charges. But until then, it’s premature,” said Philippine Justice Secretary Leila de Lima.

“We will handle these (recommendations) based on our laws. The results of the NBI probe will tell what the next steps would be,” she added.