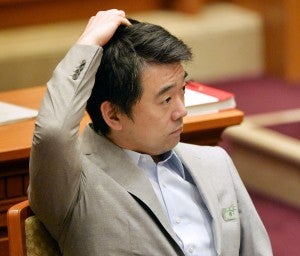 TOKYO—A Japanese mayor who caused a storm with his comments on wartime “comfort women” survived a censure motion filed by local politicians on Thursday.

Council members in the western city of Osaka rejected the motion against mayor Toru Hashimoto, who is also joint leader of the national Japan Restoration Party, city officials said.

Hashimoto prompted outrage at home and abroad by suggesting that battle-stressed soldiers during World War II needed the services of up to 200,000 sex slaves from Korea, China, the Philippines and elsewhere who were forcibly drafted into Japanese brothels.

The non-binding motion had earlier been expected to be approved. But the New Komeito Party, which holds the balance of power on the council, reversed its earlier stance and voted against it.

Ichiro Matsui, Osaka prefectural governor and a close aide to Hashimoto, earlier hinted that if the motion was passed, Hashimoto would resign to force a mayoral election in which he would seek reelection.

On Tuesday Hashimoto canceled a trip to the United States after the US denounced his remarks as “outrageous and offensive.”

Seeking to contain the fallout from his comments, the former TV pundit said Monday that Tokyo should apologize to former sex slaves. But he insisted that Japan’s soldiers were not unique in brutalizing women.

He also retracted advice he gave to US military commanders in Japan, that they should let their troops use licensed sex businesses as part of what he called a crime reduction strategy.

Hashimoto has proved a colorful, if divisive, figure in Japan’s somewhat monochrome political world since he emerged as a force on the local and then the national scene.

His plain-speaking iconoclasm and ability brazenly to ride out controversy won him enough admirers to be mentioned at one time as a possible future prime minister.

However, some commentators suggest the backlash this time over his “comfort women” comments may have struck a serious blow to his reputation.