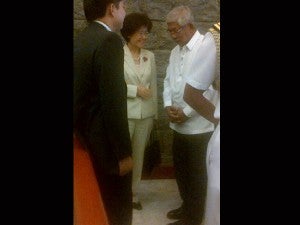 MANILA, Philippines—China raised its concerns over the Philippines’ reported plans of establishing structures on Ayungin Shoal in the disputed West Philippine Sea.

Defense Secretary Voltaire Gazmin and China Ambassador to Manila Ma Keqing discussed issues on Ayungin among other things on the sidelines of the commemoration of the International Day of United Nations Peacekeepers on Wednesday at Camp Aguinaldo.

The two leaders were seen talking for a few minutes after the event.

“They were concerned [with the] Philippines coming up with structures, additional structures in the Ayungin Shoal and I told her that the ship that is moving towards Ayungin is only for provisions of food and water for soldiers who are there,” he told reporters when asked what they discussed.

The BRP Sierra Madre is the Philippine Navy’s detachment on Ayungin Shoal.

Gazmin said he assured Ma that the Philippines would not build structures there.

“We will not violate the agreement not to construct new structures. We told them we’re only bringing supplies for our troops there, like water, food. There will also be rotation of troops because we can’t put our men there permanently or they’ll go crazy,” he said.

He quoted Ma as saying that China is continuously monitoring Philippine troops there or whether new structures are being built.

“The  threat is always there. It’s always there but we do follow some protocols like avoidance of dangerous maneuvers, avoidance of confrontational moves. So right now its holding, and we make sure that when go there also we have been doing regularly and routinely is the movement of logistics which are unarmed,” he said.

The Philippines claims the Ayungin shoal as part of its territory, as it is located 105.77 nautical miles from Palawan and is well within the Philippines’ 200-nautical-mile exclusive economic zone under the United Nations Convention on the Law of the Sea.

On May 10, the Philippines protested the presence of a fleet of Chinese fishing boats accompanied by patrol vessels at Ayungin.

Meanwhile, when asked what she discussed with Gazmin, the Chinese ambassador said they talked about “balanced relations.”

She said she also extended her congratulations to the peacekeeping operations.