MANILA, Philippines – Members of the Taiwanese team in Manila watched on Tuesday the two-hour video of the May 9 shooting of a Taiwanese boat by Philippine Coast Guard members that led to the death of a Taiwanese fisherman.

Afterwards, officials of the National Bureau of Investigation accompanied them to the port area to inspect the Coast Guard vessel. 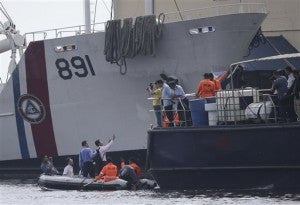 Taiwanese investigators rides a rubber boat as they inspect a ship involved in the alleged shooting of a Taiwanese fisherman while they continue their probe in Manila, Philippines on Tuesday May 28, 2013. AP

The Taiwanese probers also finished the ballistics test on Monday, firing the weapons for cross matching.

“I think it’s helpful, of course, for both sides,” Lin of the TECO said, adding that he could not comment further because the investigation was still ongoing.

He said the inspection of the vessel was a technical issue and they would depend on the assistance of the NBI and the Coast Guard.

Mendez said it would be an ocular inspection. “They can take measurements if they want and other forensic inspection,” he said.

The Taiwanese investigators were also scheduled to interview personnel from the Bureau of Fisheries and Aquatic Resources and Philippine Coast Guard personnel on Wednesday.

Asked if they were satisfied with the NBI assistance, Lin said, “So far, so good. But the investigation is still ongoing.”

Abiera said the NBI team who went to Taiwan for a parallel probe would return Wednesday afternoon.