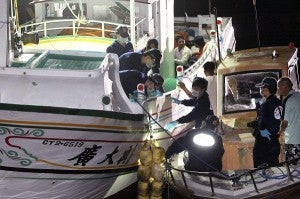 TAIPEI—Filipinos in Pintung county, where the Taiwanese fisherman fatally shot by Philippine coast guards lived, say they feel no threat from local residents.

Antonio Dimacali Manasa, who works at Dongcang Harbor, told the Inquirer that he knew Hung Shih-chen, the fisherman shot dead by Filipino coast guards in waters off Balintang Island on May 9.

“I knew him. He was good to the Filipino fishermen here and he treated us like his children,” Manasa said.

Milo Fajardo, another Filipino worker at the harbor, said no Filipino had been attacked or threatened by Taiwanese in the area.

Still, he said, he and other Filipinos there avoid the streets, especially at night.

Fajardo said he was one of those who helped Taiwanese authorities pull Hung’s boat, the Guang Ta Hsin 28, to the dock after the incident.

“After the boat had been docked, they refused to allow people to come near it,” he said.

He and other Filipinos sometimes hear unpleasant comments from Taiwanese fishermen.

“But we understand them, and we choose not to react,” he said.

Fajardo, who said he had been working in the harbor for 10 years, wondered why the Philippine Coast Guard abandoned the Taiwanese fishing boat after immobilizing it.

“They should have apprehended it,” he said. “All they needed to do was tie it to their vessel and tow it.”

Had the coast guards done that, he said, the Philippine authorities would have known what the poachers had taken from Philippine waters.

John Albert Fernando, another Filipino worker at the harbor, said the Indonesian crew member of the Guang Ta Hsin 28 had told him that the boat was in Philippine waters because he had seen “plenty of tuna.”

“I talked to him, he took his belongings, and then he disappeared,” Fernando said.

According to Fernando, the Indonesian said Hung was in the engine room during the shooting, but looked out and was hit.

A team from the Philippines’ National Bureau of Investigation has requested permission from the Taiwanese government to examine the Guang Ta Hsin 28.

The boat is docked at Dongcang, cordoned off and covered with tarpaulin.

“We are cautious,” he said, “though it’s safe because we have legal papers. Still some of our fishermen have suspended their business.”

He said the damage to the Guang Ta Hsin 28 costs around NT$8 million (P11 million).

“It’s new and made of fiber glass,” he said.

The boat was hit 45 times with high-velocity bullets. Twenty-four of the bullet holes were found at the cabin.