Grounded ship is PH’s last line of defense vs China 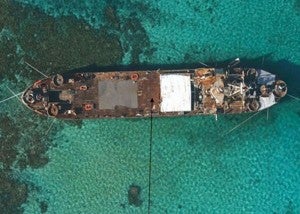 This undated handout photo released by the Philippine Government on May 23, 2013 shows an aerial view of BRP Sierra Madre, a 100-metre (328 foot) amphibious vessel built for the US in 1944 and acquired by the Filipino navy in 1976, grounded at Second Thomas Shoal in the Spratly Islands. A handful of marines living on a World War II-era ship that is grounded on a remote, tiny reef is the Philippines’ last line of defence against China’s efforts to control most of the South China Sea. The soldiers are stationed on Second Thomas Shoal in the Spratly Islands aboard a former US tank-landing vessel that was deliberately abandoned there to serve as a base, according to their former commander, Juancho Sabban. AFP PHOTO / Philippine Government

MANILA, Philippines – A handful of Marines living on a World War II-era ship that is grounded on a remote, tiny reef is the Philippines’ last line of defense against China’s efforts to control most of the South China Sea (West Philippine Sea).

The soldiers are stationed on Second Thomas Shoal (Ayungin Shoal) in the Spratly Islands aboard a former US tank-landing vessel that was deliberately abandoned there to serve as a base, according to their former commander, Juancho Sabban.

“Their lives are very hard… but they are Marines. They are used to that kind of thing,” said the retired general, former head of military forces in the western Philippines that has jurisdiction over the area.

“There is no ground, they live on a grounded ship. They depend only on supplies that are delivered to them on logistics runs.”

The shoal and the lives of the troops guarding it were thrust into the global spotlight this week after the Philippines said a Chinese warship was “illegally and provocatively” circling the area.

It was the latest in a series of aggressive steps by China in recent years to assert its claim over the West Philippine Sea that have rattled the Philippines, with others including the Chinese occupation of another Filipino-claimed shoal.

China says it has sovereign rights over nearly all of the South China Sea, even waters far away from its main landmass and approaching the coasts of Southeast Asian countries.

The Philippines, Vietnam, Malaysia, Brunei and Taiwan also claim parts of the sea, and the area has for decades been regarded as a potential trigger for major military conflict in the region.

Dozens of Vietnamese soldiers died in losing battles in 1974 and 1988 with Chinese forces for control of islands in the sea, which are believed to sit atop reserves of oil and gas worth billions of dollars.

The Spratlys archipelago, which has hundreds of islands, reefs and atolls, is one of the most hotly contested areas of the sea.

All claimants, except Brunei, station troops on various sized islands and atolls in the Spratlys to back their claims.

The Philippines occupies nine of the Spratlys, including Thitu Island (Pagasa Island), the second-largest in the area.

Ayungin Shoal is a tiny group of islets and reefs about 200 kilometers (120 miles) northwest of the Philippine island of Palawan, the nearest major landmass.

Resupply ships take between 36 and 40 hours to reach it depending on the weather.

Eugenio Bito-onon, mayor of the region that oversees the Philippine-held Spratlys, described the shoal as an eight-kilometer-long, oblong-shaped coral reef that barely rises above the water.

The BRP Sierra Madre, a 100-meter (328-foot) amphibious vessel built for the United States in 1944 and acquired by the Filipino navy in 1976, was deliberately grounded in the late 1990s to shelter the garrison, according to Bito-onon.

He said each of the Philippine-held islands were manned by “at most” a dozen Marines or Navy personnel.

Neither Sabban nor defense department spokesman Peter Galvez would confirm to AFP the troops’ exact numbers, nor their weaponry.

However Galvez said the grounded vessel produced its own electricity generated from its fuel-powered engine, giving the shoal garrison access to indoor entertainment, including movies and video games.

Satellite phones also keep them in contact with their families during tours of duty, which last between three and six months, according to Sabban.

The nearest manned rock is Mischief Reef, about 40 kilometers away, but the neighbors are not considered friendly.

Mischief Reef is claimed by the Philippines as part of its territory because, like Ayungin Shoal, it is within the country’s internationally recognized exclusive economic zone.

But in 1995 Chinese forces moved onto the then-unoccupied reef, building fortifications that China initially described as harmless fishermen’s shelters. Chinese forces have been stationed there ever since.

After the Philippines announced on Tuesday it had lodged a formal protest about the Chinese warship and the fishing vessels, China responded by insisting again it owned the area and that all other parties were there illegally.

“China has indisputable sovereignty over the Nansha islands and their adjacent waters,” foreign ministry spokesman Hong Lei said in Beijing, referring to the Spratlys by its Chinese name.

“Patrols by Chinese official ships in the waters are justified,” Hong added.

Ian Storey, a senior fellow at the Singapore-based Institute of Southeast Asian Studies, said the presence of the warship showed China was prepared to use its growing military power to protect its far-roaming fishing vessels.

“It’s a fairly strong signal that, increasingly, China is going to provide naval as well as civilian assets to protect its fishing fleets,” he told AFP.

“Of course, there’s always a danger in this kind of situation where either through miscommunication or mis-perception an accidental clash takes place.”