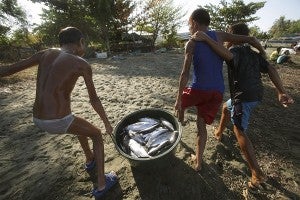 Filipino boys carry a container with fish from a boat in the coastal town of Infanta, Pangasinan province, in this May 7, 2013, photo. Since China took control of the Scarborough Shoal last year, Filipino fishermen say Chinese maritime surveillance ships have shooed them from the disputed waters in the South China Sea (West Philippine Sea) and roped off the entrance to the vast lagoon that had been their fishing paradise for decades. AP PHOTO/AARON FAVILA

MASINLOC, Zambales—Along the northwestern coast of Luzon, poor children with claw hammers clamber aboard an abandoned fishing vessel to pry loose and steal rusty nails from its deck. It’s become a familiar sight in villages where some fishermen have been forced to give up their livelihoods since China took control of their fishing haven last year.

Fishermen say Chinese maritime surveillance ships have shooed them off Panatag Shoal (Scarborough Shoal) in the West Philippine Sea (South China Sea) and roped off the entrance to the vast lagoon that had been their fishing paradise for decades.

Now, they say, they can’t even count on the Chinese to give them shelter there from a potentially deadly storm.

Some have paddled back in dugouts to sneak into the lagoon—teeming with pricey yellowfin and skipjack tuna, red grouper, blue marlin and lobster—while their mother boats hide from a distance.

But other Filipino fishermen in the northwestern towns of Masinloc in Zambales province and Infanta in Pangasinan province have sold their boats, or simply abandoned them on the coast, and turned to other work, including raising pigs in their backyards.

Fish trader Joey Legazpi has sold most of his 12 outrigger boats, which largely depended on Panatag’s pristine fishing waters, and opened a small food store in Infanta.

“It’s gone,” Legazpi said, noting that the Philippines’ ill-equipped forces are no match for China’s mammoth military. “We’ve lost hope we can get Panatag back.”

Large swarms of fishing fleets are getting entangled in an expanding labyrinth of Asian territorial conflicts.

The stakes are rising as China and other rival claimants in the West Philippine Sea pour more air, naval and paramilitary forces into the area, increasing the risk of confrontations.

The chain of reefs and rocks 230 kilometers west of Zambales falls under its 370-km exclusive economic zone, Filipino officials say.

The area lies about 870 km from China’s nearest coast. Some other islands in the West Philippine Sea claimed by China are much closer than that, but those are also claimed by other countries, including Taiwan and Vietnam.

Many other areas of the sea are volatile. Vietnam lodged a protest in March after claiming its fishermen were fired upon by a Chinese ship, damaging their boat.

Two weeks ago, Filipino coast guards killed a Taiwanese fisherman in a confrontation with a fishing vessel. Manila has apologized but Taiwan has retaliated by freezing jobs for Filipinos, recalling its envoy and cutting trade exchanges.

Ian Storey, senior fellow at the Institute of Southeast Asian Studies in Singapore, said rival claimants had hardened their positions and tried to bolster their sovereignty claims through national legislation or before the United Nations.

Beijing, which has aggressively asserted claims to virtually the entire sea and separately to a string of East China Sea islands it contests with Japan, has turned to administrative acts and chased away fishermen it accuses of intrusion.

“The prospect of a resolution to the various disputes in the [West Philippine Sea] is very dim,” Storey said.

Filipino fishermen in Masinloc and Infanta who had journeyed to Panatag Shoal for years told The Associated Press that Chinese surveillance ships had driven them away and pursued them in dangerous cat-and-mouse chases.

“Our fishermen have become scared,” said Mayor Desiree Edora of Masinloc, a fishing town that claims jurisdiction over the shoal.

“What power do they have? The other side has (defense) equipment and what do the fishermen have? Only Styrofoam, ice and so forth—so what they did was to leave to save their lives,” she said.

Alarmed by the recent territorial tensions, Southeast Asian countries have sought a legally binding code of conduct with China to discourage belligerent behavior and prevent fighting.

But Beijing has not clearly said so far when it would sit down to discuss the proposal.

Joynes Pursines, skipper of the Queen Kim Urich, said that he and his men were chased away from Panatag Shoal three times late last year.

At one point, he said, his outrigger boat was hemmed in by two ships, their deafening horn blowing repeatedly close by and the Chinese waving red flags.

“We thought they’d ram us,” he said. The Chinese ships chased him for about 5.5 km and backed away when Pursines’ ship was about 18 km from the shoal.

Legazpi said the dispute over the shoal put the lives of their fishermen at risk when fierce monsoon winds threatened to lash their boats late last year.

They could not enter the shallow, calm waters of Panatag Shoal’s 130-sq-km lagoon, because Chinese surveillance ships stood guard nearby.

“How can they do that when it’s the law of the sea that people in distress should be helped?” Legazpi asked.

“My men just returned home and cut short their fishing trip. Nobody wanted to go missing at sea because there won’t be any death certificate and their families wouldn’t get any benefit,” he said.

He said seven of his fishermen disappeared when a storm hit the shoal in 2005.

The Associated Press sought comment on the fishermen’s claims from the Chinese foreign ministry in Beijing but it did not reply.

Philippine officials have protested China’s blockade of the lagoon.

Macario Forones, a fish trader in Masinloc, is now among those who are raising pigs to make ends meet.

“I used to have up to 60 fishermen working with me. Now all of them are gone,” he said.

He sent outrigger boats into the shoal for a time, but stopped after the Chinese moved their ships to discourage such efforts.

But Forones is not giving up. He had his outrigger boat reinforced, hoping he will soon be able to send it back to the shoal.

His boat stood brightly with a new coat of white and orange paint on Masinloc’s coast as a nearby abandoned vessel rotted under the sun.