Our Scarborough Shoal conflict with the People’s Republic of China (Big China) – which ignited on April 9, 2012 when Chinese fishing vessels were caught poaching in Philippine waters by the Philippine Navy – has taken a back seat to a potentially graver conflict in the West Philippine Sea, this time with Taiwan, also known as the Republic of China (Little China), a conflict which was sparked on May 9, 2013 when the Philippine Coast Guard (PCG) spotted a Taiwanese fishing boat poaching in Philippine waters off Balintang Island.

The Coast Guard officers on board the MCS-3001, a Bureau of Fisheries and Aquatic Resources (BFAR) vessel, ordered the trespassing boat to stop and prepare to be boarded. But the Taiwanese vessel, Guang Ta Hsin 28, ignored the order and attempted instead to ram the BFAR vessel to evade capture. After evading contact with the Taiwanese boat, the Coast Guard ship pursued the fleeing fishing boat. After firing a warning shot, an ill-advised order was given for the Coast Guards to fire on the engine of the Taiwanese boat to force it to stop.

The Coast Guard ship ended its pursuit when it saw 8 to 10 Taiwanese fishing boats in the direction where the Guang Ta Hsin 28 was headed. As they turned their vessel back to return to port, the Coast Guard officers were unaware that one of the 45 bullets they shot at the boat’s engine had struck and killed Hung Shih-cheng, a 65-year-old Taiwanese fisherman who was hiding in the hull of the Taiwanese boat.

The fatal shooting of the Taiwanese fisherman sparked outrage and anger all over Taiwan and led to talk of retaliatory measures against the Philippines by the Taiwan government of President Ma Ying-jeou. 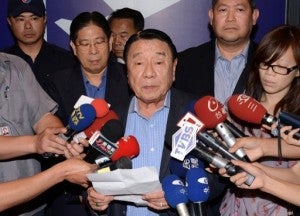 Beijing immediately capitalized on the conflict which it called a “barbaric shooting” as Chinese state media devoted lengthy reports on the killing of the Taiwanese fisherman.

“The Philippines is the most ‘barbaric’ country in the South China Sea,” editorialized the Communist Party-run Global Times on May 10. “If it is confirmed the Philippine Navy is behind the shooting, the mainland should show its stance by intensifying navy activities in the disputed water between the mainland and Philippines.”

While they may have nuclear warheads pointed at each other, on May 10, the Los Angeles Times reported that “Beijing and Taipei united in their condemnation of the Philippines on Friday for the shooting death of a Taiwanese fisherman in disputed waters.”

Taiwan President Ma Ying-jeou issued a 72-hour ultimatum on May 11 demanding a full apology from the Philippine government, financial compensation for Hung’s family, as well as agreement to conduct a joint investigation.

The Aquino administration appeared willing to respond positively to Taiwan’s demands because of its concern for the safety and welfare of the 87,000 OFWs in Taiwan, especially after receiving reports of at least four OFWs being battered and mauled by angry Taiwan mobs.

But the apology could not mention that it was from the Philippine government as this would violate the nation’s “One China” policy as the Philippines recognizes Beijing as the government of China and does not have diplomatic relations with Taiwan.

Aquino dispatched Amadeo Perez, the chair of the Manila Economic and Cultural Office (Meco) in Taiwan, the de facto Philippine embassy in Taipei, to convey the Filipino people’s apology “to the people of Taiwan.” When he arrived in Taipei, Basilio found that he could not even check in to a first-class hotel because of Taiwan’s hostility against the Philippines. He also learned that restaurants and business establishments refused to serve Filipino customers, a racist practice that the Taiwan government did not discourage.

Basilio conveyed the apology to President Ma as directed by President Aquino but the Taiwan president rejected it, declaring that Manila had not shown “sufficient sincerity”, demanding that the apology must be made on behalf of the Philippine government.

South China Morning Post commentator J. Michael Cole commented that the Philippines could not give Taiwan what it wanted: “Afraid of angering Beijing by breaking its commitment to a “one China” policy, this was as far as Manila could probably go — something that Taipei knew full well. By accepting this apology, however “unofficial” it may have been, the Ma administration would have shown magnanimity while making it possible for both sides to bow out gracefully.”

After the 72 hour deadline passed, Taiwan froze all hiring applications to Taiwan and commenced provocative naval exercises as a show of force in the disputed waters between Taiwan and the Philippines.

Manila Standard columnist Alejandro del Rosario denounced Taiwan’s overreaction. “Taipei has again played the Filipino workers card, slowing the processing of work visa applications. The ugly part of the backlash to the May 9 Batanes incident is our countrymen are being harassed and beaten by angry mobs in Taiwan… It is a sad commentary that the Philippine government is groveling before Taiwan in the face of economic and labor sanctions.” (The thugs of Taiwan, May 18, 2013).

In his May 19, 2013 column in the South China Morning Post, Philip Bowring accused Taiwan of “nationalistic chauvinism” that will only exacerbate regional tensions. 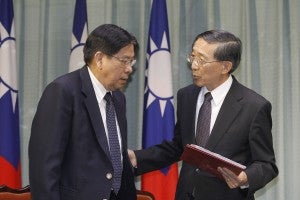 “For sure, the Philippine coastguard was guilty of the trigger-happy behaviour so common in a country which inherited its gun culture from the US and whose armed services are not known for their discipline. But the reaction by the government in Taipei, with economic and other sanctions, is out of all proportion given that this unfortunate event was clearly the result of local misjudgment rather than the state policy of the sort which sends Chinese warships well within the Philippines’ exclusive economic zones, not to mention several incidents when Chinese vessels have opened fire on Vietnamese fishing boats and killed people.”

“For the Han chauvinists, an apology from the president of the Philippines is not enough. The Filipinos must grovel, be reminded that they, like Malays generally, are the serfs of the region,” Bowring charged.

Bowring further noted:  “Taipei’s reaction seems more than just local political pressures on a weak President MaYing-jeou but linked to the desire to show that the island’s Kuomintang government is at least as eager to pursue Chinese maritime claims as Beijing.”

It should be noted that China’s assertion of ownership of 3.5 million square kilometers of the South China Sea is based on the “9 dash line” that first appeared in an official map published by the Kuomintang government of Chiang Kai-shek in 1947. It has been included in all subsequent maps issued under the Chinese Communist government.

It should also be noted that in the same year that Chiang Kai-shek published his “9 dash line” map, his Kuomintang forces occupied Taiwan which had liberated itself from the Japanese invaders. On February 28, 1947, a Taiwanese woman was arrested by Chiang’s government for selling cigarettes without a license.

The arrest sparked public protests against the repression and corruption of the occupying Kuomintang government. Chiang sent more troops to Taiwan even as he negotiated with the protest leaders. When sufficient troops arrived, the Kuomintang started rounding up all the protest leaders and executing them one by one – scholars, lawyers, doctors, students and local leaders of the protest movement. Almost 28,000 of them were slaughtered.

“The date “February 28” is etched into the hearts and minds of the Taiwanese people like the word “Holocaust” is in the history of the Jewish people. On that day, 50 years ago in 1947, an incident took place in Taipei, which led to the massive slaughter of thousands of Taiwanese at the hands of Chiang Kai-shek’s Chinese troops.

The event was the beginning of 40 years of repressive martial law on the island, during which Chiang’s Kuomintang mainlanders ruled the Taiwanese with iron fist. This ended only in 1987, when martial law was lifted, and Taiwan started to move towards democratization.”

Taiwan President Ma Ying-jeou is also concurrently the chairman of the Taiwan Kuomintang Party and, as such, bears responsibility for the slaughter of 28,000 Taiwanese in 1947 and for 40 years of repressive rule in Taiwan.

Just before May 9 skirmish in Balintang Island, Pres. Ma’s favorability rating had fallen to a record low of 19.1%, while public dissatisfaction had climbed to a record high of 69.9%, according to the China Times. Just as he expected, Ma’s ratings soared when he imposed sanctions on the Philippines and on the Filipino OFWs after the killing of the Taiwan fisherman.

As the Philippine Daily Inquirer noted in its editorial on May 19, 2013 (“Keep them safe”), “The unpopular president of Taiwan (approval ratings below 20percent) has found a populist cause to die for—or, rather, to unleash baseball bat-wielding mobs for. The shooting of a 65-year-old Taiwanese fisherman by the Philippine Coast Guard last May 9, in waters the Philippines claims as its own but which Taiwan describes as within “overlapping” exclusive economic zones, has provided Ma Ying-jeou with an excuse to break his reputation for indecisive leadership, and to rally the Taiwanese under a nationalist cause not involving mainland China.”

What should be done?

The answer may come from an unlikely source, Teddy Boy Locsin, the infamous author of the affidavit of intent to return amendment to the 2003 Overseas Absentee Voting Act. In his article which appeared on abs-cbnnews.com on May 21, 2013 (“What is to be done with Taiwan?”), Locsin proposes a solution that he modestly believes “drips with amazing intelligence and outstanding decency”:

“The president should formally apologize to the government of Taiwan for our military killing of a Taiwanese civilian, regardless of the circumstances. We lose nothing by being polite and lose plenty by being bastos (insolent). Only the truly strong and self-confident are polite; the rude are incontinent.

Just say:“On behalf of the government of the Republic of the Philippines, please accept my apology for the unfortunate incident where the life of a Taiwanese fisherman was lost and a fishing vessel destroyed. We shall make the appropriate reparations after a full investigation into the incident, conducted not just by(Justice Secretary Leila De Lima) but by your good selves as well, to arrive at a fair understanding of the circumstances that led to that tragic result. Sincerely, Benigno Aquino III, President.”

After I initially dismissed this suggestion as typically arrogant Teddy Boy bravado, I reflected and thought it actually wise because, as the author explains, it puts China in a “quandary.”

“Red China cannot complain that this presidential apology violates the One-China Policy, which is no way altered by this act of civilization….If Red China complained, it can kiss any hope of a peaceful reunification of Taiwan with mainland China; it will be goodbye for good because the Taiwanese will realize that mainland Chinese do not regard them as Chinese enough to be protected from wanton state actions such as our Coast Guard perpetrated.”

“On the other hand, if Red China says nothing, it has just allowed us to take the first olive out of the tight bottle of the One China Policy that has denied us the benefits of fuller relations with one the cash-richest countries on the planet, whose economy is so advanced, it needs to move plenty of its industries off shore to leave the highest technological endeavors on the island.”