Aquino: We can fight back vs any threat | Global News
Close
menu
search

Aquino: We can fight back vs any threat 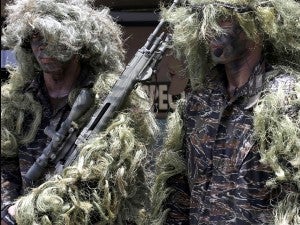 MANILA, Philippines—Faced with territorial disputes and worries of external and internal threats, President Benigno Aquino III on Tuesday claimed that the Philippines can fight back and defend itself within its bounds.

Department of Foreign Affairs spokesman Raul Hernandez said the Philippines denounced the “provocative and illegal presence” of Beijing’s ships off Ayungin Shoal in the South China Sea, adding the area is “an integral part of our national territory.”

“We have already sent communications on this. We have already told them about our position regarding these vessels, which have intruded in our EEZ (Exclusive Economic Zone),” Hernandez in a press briefing on Tuesday.

Asked what such “communications” were, Hernandez said: “When we send communications on things like this, when there are intrusions, we file protests.”

The DFA filed the protest with the Chinese Embassy in Manila on May 10 following confirmation that at least three Chinese government ships were seen near Ayungin shoal, an “integral part of our national territory.”

Hernandez said the shoal, located some 105.77 nautical miles from Palawan, “constitutes part of our 200-nm continental shelf as provided under the Unclos (United Nations Convention on the Law of the Sea).”

The official said a fleet of 30 fishing vessels were also spotted around the Mischief Reef and the Kalayaan Island Group, also a Philippine-occupied territory in the West Philippine Sea.

“The fishing vessels are still there and they go around the place and that’s why what we have been asking the Chinese authorities is to respect our sovereign rights over our EEZ, because the resources in our EEZ are meant for the Filipino people,” Hernandez said.

The development came amid heightened tension over the West Philippine Sea following the death of a fisherman from Taiwan, whose vessel ventured into Philippine territorial waters on May 9 and allegedly tried to ram a Philippine Coast Guard (PCG) patrol boat.

The PCG admitted to the shooting but said it was in self-defense. An angered Taiwan has imposed sanctions on the Philippines over the issue, including a freeze on the hiring of Filipino workers and trip cancellations among Taiwanese tourists.

Earlier this month, the Philippines warned China against encroaching into its maritime borders after Chinese state media announced the dispatch of some 30 fishing vessels off Hainan province in Southern China for a 40-day fishing fleet.

The Philippines viewed this move as a “projection of their nine-dash line claim, which we believe is excessive in violation of international law,” Hernandez said.

He said the protest has been in line with the Philippines pending bid for arbitration against China before the United Nations arbitral tribunal, legal action that aimed to halt Chinese incursions into established Philippine maritime borders in the West Philippine Sea.

The move also aims to nullify China’s nine-dash line, a delineation which places almost all of the territories in the West Philippine Sea within Chinese borders.