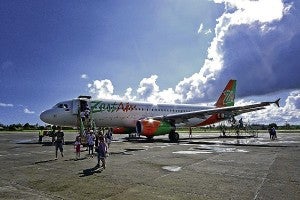 MANILA, Philippines—Local budget carrier Zest Airways has suspended its daily chartered flights between Kalibo, Aklan, and Taipei amid the ongoing bitter tensions between the Philippines and Taiwan.

The company said the cancellation of its Kalibo flights were done “at the request of the charter agent.”

“The unfortunate death of the Taiwanese fisherman is currently under investigation by both governments of the Philippines and Taiwan. It is our hope that a resolution is reached at the soonest possible time,” Zest Airways said.

“We have been servicing this route since 2011 and hope to resume operations soon,” the company said, noting that Kalibo, one of the two gateways to Boracay Island, was a popular destination among Taiwanese tourists.

The Kalibo-Taipei flights are suspended indefinitely.

Taiwan is the country’s fifth biggest market for tourists, next to South Korea, the United States, Japan, and the Chinese mainland. In the first quarter of 2013, a total of 53,867 tourists from Taiwan came to the Philippines, making up 4.24 percent of total arrivals.

Last May 9, a Taiwanese fisherman was killed in his boat off Balintang Island during a chase with Philippine Coast Guard vessel MCS-3001.

Philippine and Taiwanese officials have agreed on a “cooperative investigation” of the fatal shooting in hopes of easing tensions between the two governments.

Asked if the airline was planning a similar move, budget carrier Cebu Pacific said it would continue its Taiwan flights for now. For its part, flag carrier Philippine Airlines (PAL) said it would not comment on the issue.