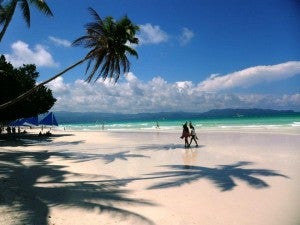 ILOILO CITY, Philippines — Hotels and resorts on Boracay Island have been reeling from the cancellation of bookings of Taiwanese tourists amid the diplomatic row following the killing of a Taiwanese fisherman by Filipino coast guards, according to travel operators.

Chusuey, who owns the Boracay Regency group of hotels, said his hotels alone had bookings for 100 rooms cancelled.

He said chartered flights and groups tours from Taiwan had been suspended.

The foundation’s president, Dionisio Salme, said other resorts had also been experiencing cancellations over the past five days ago. “We hope that this will be temporary but it is unfortunate that this happened during the summer season,” Salme said.

Nenette Aguirre-Graf, who operated the 26-room Boracay Beach Resort, said her hotel had cancellations for bookings for 10 rooms. “We have to refund their credit card payments,” she said.

Taiwan is the second biggest market of Boracay among foreign tourists next to Korea, according to the Department of Tourism.

Boracay Island also suffered a slack in tourist arrivals after China slapped a travel ban on the Philippines last year over the Scarborough Shoal dispute.

Still, tourist arrivals on the island reached 1.2 million in 2012, affirming projections that the Chinese move would have minimal impact on Boracay.