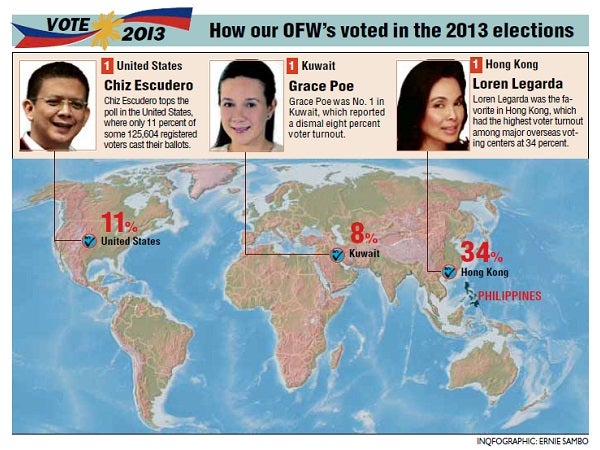 Overseas absentee voting (OAV) turnout was way below the Commission on Elections’ hoped-for 60 percent in major precincts  around the globe. Based on available reports, the overseas vote may be even less than the 26 percent achieved in 2010 despite the stepped up OAV campaign, with some major areas logging only five to eight percent voters turnout.

In Saudi Arabia and the rest of the Middle East, which accounts for 40 percent of almost a million OAV registrants, turnout figures point to less than 15 percent.

In Kuwait, a major destination of overseas Filipino workers, the voter turnout was barely eight percent of some 40,000 registered voters, according to embassy officials there.

In the United States, another  big voting block, the turnout was placed at only 11 percent. Reports said only 13,976 out of  125,604 registered voters in the US and the Caribbean actually cast their vote.

The only relatively bright spot was Hong Kong, where 34 percent of its over 122,000 voters cast their votes. According to Hong Kong media reports, 28,260 Filipinos in Hong Kong participated in the month-long OAV. The turnout surpassed the 20 percent turnout in the 2007 senatorial elections.

“The result of the OAV is disappointing but we hope that next time, we can encourage more OFWs to go out and cast their votes,” the Philippine charge d’ affaires in Kuwait, Raul H. Dado, was quoted as saying in the Kuwait Times.

However, Dado expressed elation that the automated system went smoothly and results were generated very fast. “It’s amazing that the results come faster and very convenient,” Dado had said.

“There were no glitches as some posts experience, but we are happy that Filipinos in Kuwait participated in the elections,” Dado had said.

“He admitted that there were some last minute voters who could not reach (the voting center) by the deadline of 2 p.m. There were about 15 to 20 people who had come all the way from their respective work places to cast their vote but were disappointed since they were 15 to 30 minutes late and the precinct had closed…They were disappointed but we have rules to follow,” Dado also told the Kuwait Times.

In an online post, Philippine Ambassador to Saudi Arabia Ezzedin H. Tago lauded the smooth conduct of the OAV in the Kingdom of Saudi Arabia but encouraged more Filipinos in Saudi Arabia “to exercise their right to vote during the next elections in 2016.”

“The Embassy in coordination with Comelec and the OAV Secretariat of the Department of Foreign Affairs will start soon its enhanced campaign for even more Filipinos in Saudi Arabia to register and vote for the elections in 2016,” said Tago.

One OFW interviewed in Kuwait media, Bong Pagutayao,said he had just landed in Kuwait that day but failed to vote. “I came 10 minutes past the deadline and was not allowed to vote,” he complained.

“I really wanted to be heard, but what to do? I came from the Philippines and arrived only in the morning. I had to report to work, and from my work place, I came to vote but I was a bit disappointed that I missed the deadline. I hope next time they could extend the time at least by an hour,” he told Ben Garcia in Kuwait.

Postal voting was allowed in  almost all European centers. But quite a number of OFWs complained they did not receive their election ballot in the mail due to a change in address.

Philippine Ambassador to UK Enrique Manalo was quoted by ABS-CBN as saying he was not giving up and that overseas voting should continue.

Read Next
How overseas Filipinos voted (Partial and unofficial)
EDITORS' PICK
Legarda emphasizes role of ICC/IPs in nation building this IP month
TNT nears PBA crown after rout of Magnolia in Game 4
Renewal of driver’s license now requires taking LTO education seminar
PH still at bottom of COVID-19 economic resilience ranking
Work-From-Home is here to stay and requires reliable logistics
Climate Change Commission and Nestlé PH to discover sustainability-focused solutions
MOST READ
Drivers now required to take driver’s education upon license renewal – LTO
Marcos Jr’s ‘special diploma’ from Oxford: You can have it, too
OVP spox to Imee Marcos: Robredo is an extraordinary lawyer
Don’t do that: Robredo to supporters calling to boycott restos supportive of Marcos
Don't miss out on the latest news and information.