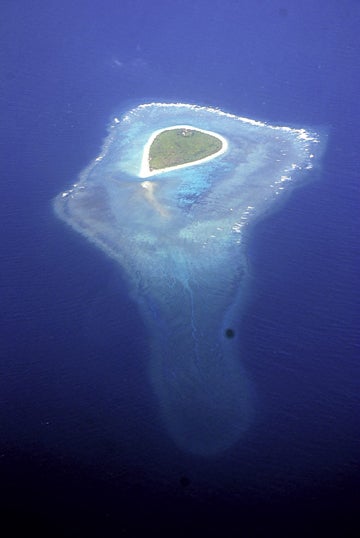 An aerial view shows an islet in the disputed Spratly Group of Islands, in the West Philippine Sea. PHILIP TUBEZA/INQUIRER

MANILA, Philippines—The Department of Foreign Affairs said Friday it would seek regional backing for a plan on pursuing joint development of disputed areas in the West Philippine Sea (South China Sea) amid China’s increasingly robust assertions of its claims.

He said the aim was to eventually get the 10 Asean nations, and later on China, to endorse the proposal to delineate the disputed sections of the strategically located and reputedly resources-rich area.

“If we can define those disputed features then we can have the joint development of those areas,” Hernandez said.

Areas not in dispute should be the exclusive preserve of the country that owns them, Hernandez said.

These areas, which straddle vital commercial shipping lanes, are subject to a tangle of maritime claims by China, Taiwan, and Asean members Brunei, Malaysia, the Philippines, and Vietnam.

However China maintains it owns all of the West Philippine Sea, even waters approaching the coasts of Southeast Asian countries.

Asean, which also includes Cambodia, Indonesia, Laos, Malaysia, Singapore and Thailand, agreed with China at a ministerial meeting last week to a set of guidelines setting a framework for an eventual code of conduct for the sea.

But China has consistently rejected efforts for the disputes to be resolved in a multilateral setting.

It prefers bilateral negotiations, which other countries fear is a divide-and-conquer approach that would weaken their bargaining capabilities with the Asian superpower.

Hernandez said that if the Philippine proposal got traction it would be tabled for discussion by Asean senior officials and eventually its foreign ministers.

After that, getting China on board would be the next challenge, he added.