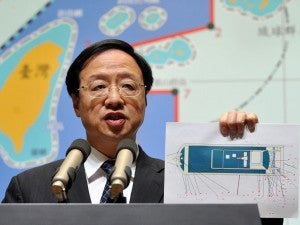 Premier Jiang Yi-huah speaks while holding a picture showing the number of gun holes in a fishing vessel after it was assaulted by the Philippine coastguard, killing a Taiwanese fisherman, during a press conference in Taipei on May 15, 2013. AFP PHOTO / Mandy Cheng

DAGUPAN CITY – Filipinos have been refused service in restaurants and supermarkets, as tensions continue to rise over the killing of a Taiwanese fisherman by the Philippine Coast Guard  in the Balintang Channel last week, said Amadito Perez Jr., chair of the Manila Economic and Cultural Office (Meco).

Many such cases have occurred in the hometown of Hung Shih-cheng in Taiwan, he told the Philippine Daily Inquirer in a telephone interview from Taipei.

“We have received numerous reports of harassment, particularly from Kaoshiung City, where the slain fisherman resided. Emotions are running high there and you can feel the animosity toward the overseas Filipino workers,” he said. “Some restaurants refuse to serve food to Filipinos and some supermarkets won’t let Filipinos inside to buy groceries. They (Taiwanese) cast angry glances at Filipinos. I advised them to just buy from the markets and not to wander around, to stay at home if they have nothing important to do outside.”

The Meco is verifying these reports, including claims that some migrant workers were beaten up by Taiwanese residents, he said.

“The situation is tense. The Filipinos are afraid to lose their jobs. I advised them to stay calm and never to retaliate no matter the provocation,” Perez said.

There are 90,000 Filipino workers in Taiwan, 10 percent of whom are domestic workers.

Perez said he was informed of factories that have put out news releases threatening to terminate the contracts of Filipino workers because of the death of Taiwanese fisherman Hung Shih-cheng.

But the factories that issued the threats did not come from the electronic sector, which employs 25,000 Filipinos, he said.

“We have good workers in the electronic sector. The Taiwanese cannot just fire them or their electronics sector would be paralyzed. But there are factories in other sectors that may send our workers back home,” he said.

The Taiwanese government has stopped issuing working visas to Filipinos and has advised tour agencies to cancel tours to the Philippines, he said.

Taiwanese tourists rank fifth on a list of top foreign tourists who frequent the Philippines.

The Meco was ready to evacuate Filipino workers if needed, “but we are proceeding with caution,” Perez said.

He admitted he was not spared from the prejudice. He said when he tried to check in at a Taiwanese hotel, he was informed that there was no vacant room.

“There was a small hotel that accepted us. But they told us later they could not accommodate us because of the many reporters outside the hotel and the guests were complaining of being disturbed,” he said.

Local reporters have been hounding Perez there since the incident happened.