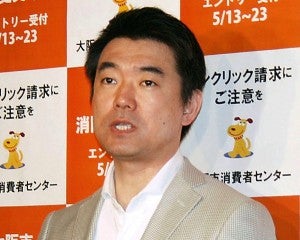 In this May 13, 2013, photo, Osaka Mayor Toru Hashimoto answers reporters’ questions at the Osaka city office in Osaka, western Japan. Osaka’s outspoken mayor has said the system in which Asian women were forced to become wartime prostitutes before and during World War II was necessary to “maintain discipline” in the Japanese military. AP PHOTO/KYODO NEWS

WASHINGTON—The United States on Thursday denounced as “outrageous” comments by an outspoken Japanese mayor who said “comfort women” forced to provide sex during World War II were a military necessity.

Osaka Mayor Toru Hashimoto, whose comments have triggered an outcry, offered Thursday to meet former wartime sex slaves to apologize for their suffering. But he again insisted that Japanese soldiers were not the only forces who had brutalized women.

“As the United States has stated previously, what happened in that era to these women who were trafficked for sexual purposes is deplorable and clearly a grave human rights violation of enormous proportions.”

Washington again sent its “sincere and deep sympathy to the victims, and we hope that Japan will continue to work with its neighbors to address this and other issues arising from the past,” Psaki added.

Up to 200,000 “comfort women” from Korea, China, the Philippines and elsewhere were forcibly drafted into brothels catering to the Japanese military during WWII, according to many mainstream historians.