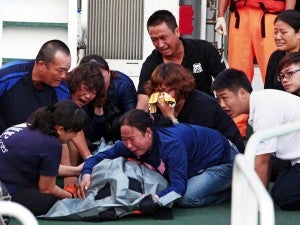 Taiwan foreign minister David Lin told reporters that “the Philippines has voiced deep regret and apology for the incident” after a closed-door meeting with Antonio Basilio, the de facto Philippine ambassador to Taipei.

The Philippine government will send a special envoy to Taiwan to convey his apologies and condolences to the family of 65-year-old fisherman Hung Shih-cheng, who was shot dead on Thursday, Basilio said.

“Chairman (Amadeo) Perez will repeat his deep regret and apology from the people of the Philippines to the people of Taiwan and the family of Mr. Hung for the grief and suffering from his death,” Basilio said, adding that the Philippines would provide “financial assistance” to the victim’s family.

Perez Jr. is chairman of the Manila Economic and Cultural Office (MECO) that represents the Philippines’ interest in Taiwan.

Taiwan had demanded an apology by midnight Tuesday (1600 GMT), saying that otherwise it would conduct a naval drill in waters near the Philippines. It had also threatened to freeze the sending of Philippine workers to the island.

According to Lin, the two sides agreed to jointly launch an investigation into the incident, which sparked outrage in Taiwan and comes at a time of heightened tensions around the region over rival claims to the nearby West Philippine Sea (South China Sea).

Lin said Taiwanese investigators would fly to Manila Thursday while their Filipino counterparts travel to Taiwan to inspect the fishing vessel and interview three witnesses who were on the boat at the time of the incident.

The two sides also agreed to open fishery talks “as soon as possible” so as to avoid the recurrence of similar incidents.

The state Central News Agency had said the naval exercise would be held Thursday, involving a Kidd-class destroyer, a Perry-class frigate and three coast guard frigates. A number of fighter jets would also be involved in the drill, which would for the first time simulate the Philippines as the enemy.

It was not clear from his remarks whether the naval drill would still go ahead.

The Philippine Coast Guard has admitted firing at one of four Taiwanese fishing vessels it said had strayed into its waters, allegations denied by the victim’s son who was with his father and two other sailors on the boat at the time.

Taiwan prosecutor Liu Chia-kai described the incident as “nothing but a slaughter”, after examining the boat which he said was hit by more than 50 bullets.

Taiwan at the weekend sent four coast guard and naval vessels to protect its fishermen in waters near the Philippines, while President Benigno Aquino has called for calm and given assurances of an in-depth investigation.

China, the Philippines, Taiwan, Vietnam, Malaysia and Brunei all have competing claims to parts of the West Philippine Sea.