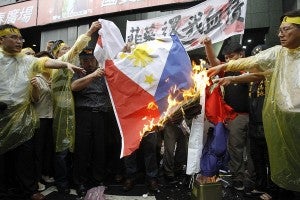 Protesters and lawmakers burn Philippines flag outside the Philippines representative office in Taipei, Taiwan, Monday, May 13, 2013, to protest the killing of a Taiwanese fisherman by the Philippines coast guard in disputed waters between Taiwan and the northern Philippines. AP PHOTO/WALLY SANTANA

Philippine President Benigno Aquino called for calm as tensions escalated between the two countries over last week’s incident in which the 65-year-old fisherman was shot dead.

Hundreds of fishermen wearing yellow headbands and chanting “Justice must be done!” and “Killer must be punished!” hurled eggs at the Philippine de facto embassy in Taipei, which was guarded by dozens of police.

Aquino said Monday that the embassy in Taiwan was in talks with Taiwanese foreign ministry officials and had assured them an investigation was being carried out.

“I think it is in the interest of both parties to proceed in a calm basis,” Aquino told reporters. “We are proceeding in that manner.”

The Philippine coastguard admitted on Friday to firing at one of four Taiwanese fishing vessels that it said had strayed into the country’s waters.

The victim’s son, who was with his father and two other sailors on the boat at the time, has insisted they did not cross into Philippine waters.

Prosecutor Liu Chia-kai described the incident as “nothing but a slaughter”, after examining the boat after it was towed back from sea.

Taiwan’s government has come under pressure from the opposition and the media to take action.

US banks on PH pledge

Aquino declined to comment on demands by Taiwan at the weekend for his government to apologize for the shooting and pay compensation to the victim’s family, or face a potential freeze in sending Filipino workers to the island.

There are about 87,000 Philippine domestic helpers and other workers in Taiwan, who send home hundreds of millions of dollars a year.

Taiwan at the weekend sent four coastguard and naval vessels to protect its fishermen in waters near the Philippines.

The Philippine government said on Sunday that Antonio Basilio, head of the Philippines’ de facto embassy in Taiwan, had visited the family of the fisherman and “extended condolences and apologies.”

Aquino said he did not want to comment further, preferring to let diplomats handle the dispute.

“If we comment on that (at the presidential) level, we guarantee the issue will escalate,” Aquino said.

The incident comes at a time of heightened tensions around the region over rival claims to the nearby South China Sea.

China, the Philippines, Taiwan, Vietnam, Malaysia and Brunei all have competing claims to parts of the sea.

Taiwan has ruled itself since 1949, but China still considers the island part of its territory. The Philippines, like most countries, officially recognises China over Taiwan but maintains trade ties with the island.