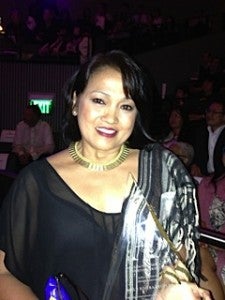 The Asian Pacific American Heritage Celebration Committee recognized Rivera-Peoples’ more than two decades of work nurturing the youth’s interest and involvement in dance, music and theater. Her training as a performer began in the Philippines, where she was a principal dancer of Dance Theater Philippines and a soloist of Ballet Philippines.

Using her talent and vast experience, she co-founded and is the current artistic director of Westlake School for the Performing Arts, 60 percent of whose students are Asian American.   WSPA has produced dancers, teachers, choreographers and school directors.

Speakers, honorees and cultural performers, reflected the diversity of the Asian Pacific American community and its significant political advances in one of the most progressive cities in the country, gains that were not earned overnight.

Rivera Peoples’ perspective on her school’s mission mirrors the protracted nature of Asians’ struggle for empowerment. She said, “I wish for my students to see that it is the little things that we do each day that sum up into a lifetime of achievement.  This award is not the goal.“

The APAHCC was established in 2005 to promote public awareness of the Asian Pacific Heritage Month and coordinate the annual celebration.  Its history goes back to October 5, 1978 when President Jimmy Carter signed a Joint Resolution adopted by U.S. Congress, declaring the week of May 4 as Asian/Pacific American Heritage Week.  Through subsequent U.S. Congress resolutions, the weeklong celebration expanded to one month in 1990 and became a permanent celebration in the country in the month of May in 1992.

Asian Americans, one third of San Francisco’s population, have been steadily gaining electoral strength in the last few years.  Besides Mayor Ed Lee, a Chinese American, there are now five Asian Americans in the 11-member Board of Supervisors.  Asians also have a visible presence in other parts of the city government as well as in labor unions and the private sector. However, it is not only its sheer numbers that have boosted the community’s increasing political power.

Gordon Chin, then executive director of the non-profit Chinatown Community Development Center told the San Francisco Chronicle in a 2011 article that activism was an important factor in Asians’ rising political clout.

Chin explained: “Tenant rights battles over places like the Ping Yuen public housing project and the International Hotel, along with land-use concerns around Chinatown, fired up the community and helped Asian Americans realize the need to deal effectively with City Hall.”

In the 1970s, Filipino activists, together with supporters from other communities, fought hard to oppose the demolition of the International Hotel in Chinatown, which housed a big number of Filipino elderly.

The evening festivities ended with stunning musical numbers by pianist and composer Jon Jang of Asian Improv Arts and a colorful community cultural procession on stage.  Jang, a graduate of Oberlin College and well known Bay Area musician, played his own interpretations of “Butterfly Lover Song,” based on Chinese melodies, and the classic “You’ll Never Walk Alone” as tribute to his late immigrant Chinese father and U.S. born Chinese American mother, who single-handedly took care of him and his two siblings after his father’s early passing.

Cayetano tags Velasco in ouster plots against him